Milestones:Development of the HP-35, the First Handheld Scientific Calculator, 1972

The HP-35 was the first handheld calculator to perform transcendental functions (such as trigonometric, logarithmic and exponential functions). Most contemporary calculators could only perform the four basic operations – addition, subtraction, multiplication, and division. The HP-35 and subsequent models have replaced the slide rule, used by generations of engineers and scientists. The HP-35 performed all the functions of the slide rule to ten-digit precision over a full two-hundred-decade range.

Developed by Hewlett-Packard Company in Palo Alto, California at 1501 Pagemill Road and introduced in 1972, the HP-35 was the first full-function, shirt-pocket-sized, scientific calculator. This invention revolutionized the profession by allowing the engineer to make almost instantaneous, extremely accurate scientific calculations, at his home, office or in the field. Three to five hours of continuous use could be expected from a fully charged battery pack. 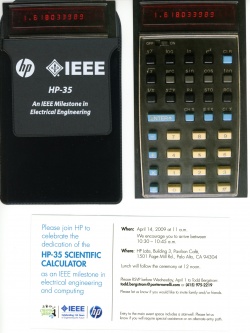 The HP-35 was the innovative culmination of mechanical design, state-of-the-art technology, algorithm development and application; all unique at the time

After the development of the HP-9100 desktop scientific calculator in the mid 1960s, Bill Hewlett, president of Hewlett-Packard envisioned the idea that HP could develop the same capability that would fit in his shirt pocket. Every few months he would walk into the corporate labs and ask how the team was doing? He stressed how important it was to get the calculating power of the desktop in his fingers.

Although semiconductor density was increasing yearly, bipolar technology was never going to be suitable, too power hungry and not small enough. Metal Oxide Semiconductor (MOS) promised high density and low power but was still in its infancy. However this didn’t stop Bill Hewlett from getting the Industrial Design group of HP Labs to mock up some ideas of shape, key layout, etc. The solid state laboratory was also working on LED displays with molded encapsulated lenses for magnification driven by low power bipolar driver circuits.

By 1970 a PMOS architecture looked promising as a candidate for scientific algorithms; a binary coded decimal (BCD) adder and 13 digit plus sign (56 bit) long multiple words in a serial circulating shift register (race track) arrangement that was very efficient of both chip size and power. The microcode word length was 11 bits; during final development shortened to 10 by having only an inferred conditional branch, a ten percent reduction in circuitry was significant at the time. The fourteen digits would just be sufficient for ten digit accuracy with an overflow or carry digit and two guard digits while still retaining sign information throughout the algorithmic iterations. The result could be displayed as either a signed mantissa and two signed exponent digits or variable length fixed point. The product had an arithmetic and register chip, control and timing circuit and several ROMs. A clock rate of 200 KHz was sufficiently high to calculate a transcendental function within a second.

The HP-35 was truly a product which you knew would be successful because the engineer at the next bench wanted it.

The ubiquitous slide-rule was obsolete within a year; the HP-35 could do all the functions of the slide-rule to ten digit precision and determine the decimal point or power of 10 exponent through a full two hundred decade range.

Forbes ASAP magazine called the HP-35 one of the twenty products that changed the modern world. The HP-35 and its descendants would sell more than 20 million units for Hewlett-Packard, making them the most popular products in the company’s history.

From the computer history museum: in 1972 Hewlett-Packard announced the HP-35 as "a fast, extremely accurate electronic slide rule" with a solid-state memory similar to that of a computer. The HP-35 distinguished itself from its competitors by its ability to perform a broad variety of logarithmic and trigonometric functions, to store more intermediate solutions for later use, and to accept and display entries in a form similar to standard scientific notation.

Excerpt from the original manual; "The objective in developing the HP-35 was to provide a high precision portable electronic slide rule; something only fictional heroes like James Bond, Walter Mitty or Dick Tracy are supposed to own.

The HP-35 has far more computational power than previous pocket calculators. Its ten digit accuracy exceeds the precision to which most of the physical constants of the universe are known. It will handle numbers as small as 10^-99 and up to 10^99 and automatically places the decimal point. It is the first pocket calculator to offer transcendental functions like logarithms and sines and cosines. The operational stack and the reverse "Polish" (Lukasiewicz) notation used in the HP-35 are the most efficient way known to computer science for evaluating mathematical expressions.

The HP-35 was designed with the user, in mind. As much time was spent on the keyboard layout, on the choice of functions, and on the styling as was on the electronics."

At the time, many of the companies producing calculators could build adequate circuits and firmware, but didn't have the experience or facilities to make a well designed housing, keyboard, and display. Many of these brand-X machines were very failure-prone and quite crude in design.

By contrast, the packaging of the HP-35 was of major importance. Its size, looks, keyboard, and display were all carefully thought out. The keyboard is divided into groups with different sizes, color and placement of nomenclature. Even differing amounts of contrast were used to separate groups. (The most used groups had the greatest contrast level.) The keys were made in a double mold process with the legends going all the way through the keys so they could never wear off. The keyboard panel used an HP-developed spring contact which used bent beryllium copper strips. The key bottoms were designed to be easy on the copper while still providing the right feel which is essentially unchanged in current calculators.

The HP-35, like all the hand-held HPs that followed, was required to remain undamaged after falling three feet onto concrete on each of its corners. The case had sculpted sides, such that the top caught the light and the bottom was in shadow making the calculator look thinner than it really was. All screws were hidden.

The milestone plaque is located in the lobby of building 3U at the Hewlett-Packard laboratories, 1501 Page Mill Rd, Palo Alto, California, adjacent to where the development occurred.