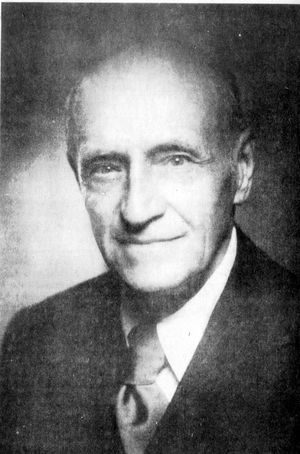 Martin H. McGrath was born in Pittsburgh, Pennsylvania, in 1902. After receiving his BSEE degree from Carnegie Institute of Technology in 1924, he joined the Standard Underground Cable Company, which later became part of General Cable Corporation. He served General Cable in various capacities until his retirement in 1969. He had been Vice President and Chief Engineer since 1955.

For his work during World War II, when he served on a U.S. Navy project to develop and conduct sea trials on buoyant cable designs for sweeping magnetic mines, he was awarded a special commendation.

After the war he directed General Cable's studies on the carrying capacity of transmission and distribution cables; on the use of his company's cable and wire products by power and telephone utilities: on numerous 69-345 kv commercial self-contained end pipe-type power cable installations throughout the country: and on the development and application of multi-pair polyethylene-insulated telephone cables.

A Fellow of IEEE and a member since 1926. Martin McGrath was one of the outstanding cable engineers who founded the IEEE Insulated Conductors Committee in 1947. It was during his chairmanship, 1953-55, that the subcommittee on overseas practices, which led to many important contributions from abroad, was set up.

Throughout his career, Mr. McGrath has served on a number of professional and industry groups, among them the steering committee for the 345-kv cable research project at Cornell University; the IEEE Working Group on ac resistance of pipe-type cables with segmental conductors; the planning group for the Electric Research Council-Manufacturers 500/550-kv taped cable and 138-kv extruded-dielectric cable research projects at the Electric Power Research Institute Waltz Mill test site; and the advisory group of manufacturers who assisted in the preparation of various Associated Edison Illuminating Companies' specifications for power cables.

He was the holder of many U.S. patents growing out of his research activities, and has written a large number of outstanding papers. Among them are the series of seven pioneer articles on "Calculations of Electrical Properties of Underground Cables," published in the Electrical Journal in 1932; and a 1957 AIEE Transactions paper co-authored with John Neher on calculations of steady-state and cyclic load ratings on duct-lay, direct buried, and pipe-type cables.

Mr. McGrath has been a registered professional engineer of the State of New York since 1937, and until his retirement was a member of Insulated Power Cable Engineers Association and of CIGRE.

Retrieved from "https://ethw.org/w/index.php?title=Martin_H._McGrath&oldid=171984"
Categories:
This page was last edited on 20 December 2018, at 17:40.
About ETHW
Policies and disclaimers