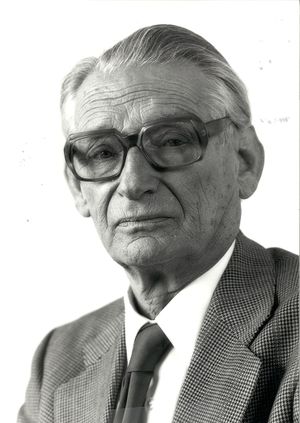 Lothar Rohde was born October 4, 1906 in Leverkusen, near Cologne, Germany. In early youth he combined with interest in science an unusual musical talent. His accomplishments at the piano nearly made him choose a career as concert pianist. However, the economic depression following World War I and parental persuasion led him to study physics at the University of Cologne. His strong interest in electronics made him transfer to the University of Jena where he studied high frequency discharge phenomena with Professor Esau. He obtained his Ph.D. in 1931.

Dr. Rohde stayed on at the University and continued publications on newly developed methods of measurements at very high frequencies. He met there also Dr. Hermann Schwarz and published with him in 1932 the description of one of the first laboratory instruments for accurate frequency measurements. In 1933 he then established with Dr. Schwarz the Physical Technical Development laboratory in München in a first floor apartment. This laboratory developed into the firm of Rohde and Schwarz located in the southern section of Munich. Since the inception of this company, Dr. Rohde has been the spiritual and technical leader of its development program and has initiated the development of a large number of novel measurement techniques and instruments of very high precision. Among the most important have been Frequency Synthesizers, Frequency Standards, Impedance Plotters and Precision Connectors. Under his guidance his company has become one of the leading manufacturers of electronic instruments and electronic test equipment in Europe from audio to the highest microwave frequencies.

Dr. Rohde has also been active in the areas of navigation and radio location, as well as in projecting the instrumentation for the German space research effort.

Dr. Rohde has a large number of technical papers and patents to his credit. Since 1952, Dr. Rhode has personally guided and edited the company journal "Rohde and Schwarz Mitteilungen" which contains technical, scientific and instructional papers by the staff illustrating the quality of the research, development and production effort of the company. In recognition of his achievements under often difficult circumstances, to wit, the aftermath of World War I and the entire World War II, the Technical University of München awarded him the honorary degree of Dr. Ing.

Dr. Rohde was a member of many technical committees and industrial organizations in West Germany. Thus, in 1957, Dr. Rohde became a member of the Bavarian Atomic Energy Commission. In 1960, he joined the Board of Directors of the German Forum for Atomic Research and in 1963, the German Commission, for Space Research, section Direction Finding, Navigation and Instrumentation. In 1967, he also became Chairman of the Pulse Techniques Sub-committee of the High Frequency Instruments and Measurements Committee (Germany).

Dr. Rohde joined IRE in 1949 as Member, became Senior Member in 1955 and was elected to Fellow grade in 1956. A special ad hoc committee of IRE visited Munich in 1961 to explore with Dr. Rohde the possible establishment of a German Section of IRE in cooperation with the German "Gesellschaft für Nachrichtentechnik". Dr. Rohde then initiated proceedings which led to a West German Section, IRE, in April 1964 of which he served as Chairman from July 1965 to June 1966. He served for several years as Vice Chairman of the West German Section and has visited the U.S. on many occasions, In August 1966, the General Assembly of URSI (International Union of Radio Science) was held in Munich, Germany and Dr. Rohde was joint host to the participants and arranged tours, as well as special lectures on high frequency measurements at the company premises.

Retrieved from "https://ethw.org/w/index.php?title=Lothar_Rohde&oldid=178059"
Categories:
This page was last edited on 18 December 2019, at 19:37.
About ETHW
Policies and disclaimers