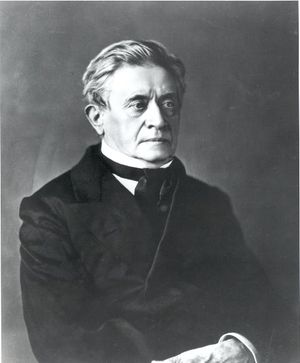 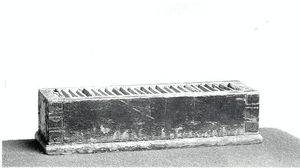 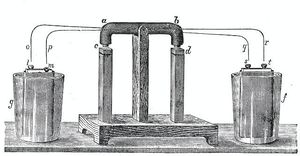 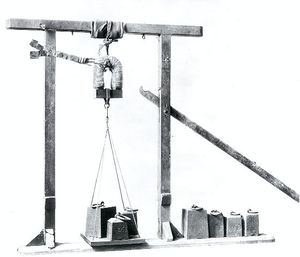 Joseph Henry was born in 1797 to William and Ann Alexander Henry in Albany, New York. At age seven he was sent to live on his uncle’s farm, but quickly found his way to the village library. When his father died in 1814, Joseph returned to Albany. He took night classes to learn more about science, tutoring private students to earn his tuition. In 1826, he entered academic life as a professor of mathematics and physics at Albany Academy. There his methods of teaching science through demonstrations as well as his lectures made him a popular teacher. He also began to make his name in the scientific world by making more powerful magnets.

While teaching, Henry also experimented with electromagnetic engines and converting magnetism into electricity, a process known as induction. The unit of the rate of change of current per second was designated the “henry” in his honor. Henry never tried to patent his discoveries—not even the system of successive electromagnetic circuits that later became the basis of Samuel Morse’s telegraph. In 1832 he accepted a position at Princeton University as the chair of natural philosophy. For the first time, he had his own laboratory for year-round research. He was also inspired by a trip to Europe and a meeting with Michael Faraday, whose experiments closely paralleled his own.

Henry was very successful at Princeton, but felt it was his duty to become the first secretary of the Smithsonian Institution in 1846. As the administrative officer of the Smithsonian, he oversaw both the increase and the diffusion of knowledge. He published scientific writings of all kinds, helped train scientists, engineers, and inventors, supported scientific societies, encouraged original research and experimentation, and promoted the wide exchange of scientific ideas. During the Civil War, he helped develop medical disinfectants, currency engraving methods, and ammunition. Although Henry knew he was doing important work, he still regretted having to give up most of his own active research. Despite these regrets, he repeatedly turned down more lucrative job offers, insisting that the best way to serve science was from his position at the Smithsonian. Henry remained interested in scientific investigation all his life and enjoyed being able to support it through the Smithsonian. In good health until shortly before his death in 1878, he personified science in America for much of the nineteenth century.

Retrieved from "https://ethw.org/w/index.php?title=Joseph_Henry&oldid=146387"
Categories:
This page was last edited on 1 February 2016, at 20:12.
About ETHW
Policies and disclaimers