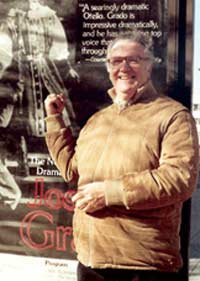 Brooklyn-born Joseph Grado was not a typical person even as a teenager. Bored with traditional high school, he dropped out and entered a vocational school to study watch making. He was at the top of his class, but vocational school didn't hold his interest either and at the age of 16, he left. Yet, what may have seemed another story of wasted youth in the making, was nothing of the sort. By the time Joseph Grado ended his working career he held the rights to forty-eight patents and had been inducted into the Audio Hall of Fame.

As the latter suggests, Grado made his name in the audio industry. After leaving vocational school Grado took a job at Tiffany’s & Company. He also worked nights teaching watch making to earn extra money. Then, in the early 1950s Grado discovered high-fidelity sound, which had only recently been developed. It became his life’s passion. Grado paid a visit to Saul Marantz, a pioneer in high-fidelity music systems whose products were well known in the industry. Marantz was impressed with the young man and sent him over to Sherman Fairchild, whose hi-fi division at Marantz was showing little signs of progress. Grado promptly landed a top-level engineering position with the company. Before long he had developed a revolutionary item in stereo design, the stereo moving coil cartridge. Subsequently, he quit Marantz to begin his own company. Scraping together $2,000 he began building phonograph cartridges out of his home. In 1955 he formed Grado Laboratories and opened a factory in Brooklyn on the site of his Sicilian-born father’s grocery business.

In the early years, in addition to phonograph cartridges Grado Laboratories produced speakers, turntables and the highly acclaimed wooden tonearm. Nearly forty years after the production on the tonearm ceased, people are still using it. In 1963 Grado ceased production of all other products and, for the next 21 years, focused solely on the production of phono cartridges. In 1976 the first truly high-end cartridges, created under the brand Joseph Grado Signature Products, hit the market. For these and other contributions to the Audio industry, Joseph Grado was inducted into the Audio Hall of Fame in 1982.

Retrieved from "https://ethw.org/w/index.php?title=Joseph_Grado&oldid=146386"
Categories:
This page was last edited on 1 February 2016, at 19:59.
About ETHW
Policies and disclaimers