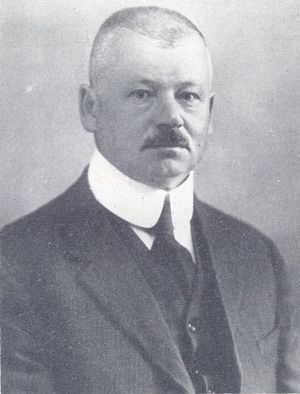 Jonathan A. Zenneck was born in Ruppertshofen, a small town in Wurttemberg, on 15 April 1871. After the usual education in the elementary schools, in the fall of 1885 he entered the Evangelical-Theological Seminary in Maulbronn, and in 1887 the seminary in Blaubeuren where he learned Latin, Greek, French, and Hebrew. In the fall of 1889 he enrolled in the Tuebingen University in the well-known Tuebingen Seminary where he studied mathematics and natural sciences. His teacher in physics was Ferdinand Braun. In the spring of 1894 Zenneck took the State examination in mathematics and natural sciences and immediately afterwards the examination for his doctor's degree.

During the summer of 1894, Zenneck undertook zoological research at the Natural History Museum in London. From the fall of 1894-1895 he fulfilled the military service requirements in the First Naval Battalion (Marines) in Kiel, in which he later became a reserve officer. From 1895 to 1905 he was associated with the Physikalischen Institute in Strassburg, Alsace, first as assistant to Braun and later as assistant lecturer.

Late in 1899, Zenneck turned his attention to wireless telegraphy, conducting experiments along the lines indicated by Braun. These experiments were mainly carried on light ships in the North Sea. In the following year, Zenneck turned his attention to the many fundamental questions in wireless telegraphy which were unexplained and during the next year he turned to the theoretical and experimental explanation of the physical fundamentals of wireless telegraphy. The result of this work was the classical book Electromagnetic Oscillations and Wireless Telegraphy, which appeared in 1906 and which, for so many years, was the standard textbook on the subject.

In the spring of 1905, he was appointed assistant professor at the Danzig Technical High School, and a year later became professor of experimental physics in the Braunschweig Technische Hochschule. In order to take part in experiments on the fixation of atmospheric nitrogen, in 1909 Zenneck joined the staff of the Badische Anilin und Sodafabrik, one of the largest German chemical concerns.

At the beginning of the First World War, Zenneck went to the front as a Captain in the Marines. Early in December of 1914, he was sent to the United States as technical advisor for the Atlantic Communication Company, taking part in experiments with the machine senders in Sayville, and with patent processes.

After the United States entered the war, he was interned first at Ellis Island and then in Fort Oglethorpe, Georgia, returning to Germany in July 1919 to resume his duties as Professor of Experimental Physics at the Technische Hochschule in Munich.

Zenneck was awarded the IRE Medal of Honor in 1928, "For his contribution to original researches in radio circuit performance and to the scientific and educational contributions to the literature of the pioneer radio art." Zenneck passed away on 8 April 1959.

Retrieved from "https://ethw.org/w/index.php?title=Jonathan_Zenneck&oldid=155921"
Categories:
This page was last edited on 9 August 2017, at 17:27.
About ETHW
Policies and disclaimers