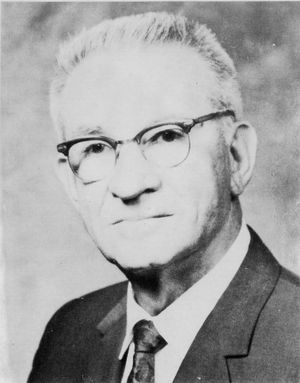 Jacob (Jack) Millman was born in Russia in 1911, and he came to Lawrence, Mass. at the age of 1 1/2 years. He obtained the B.S. in Physics from MIT in 1932. A Fellowship allowed him to spend the next year at the University of Munich studying under the great teacher A. Sommerfield. He returned to M.I.T. to complete the requirements for the Ph.D. in Theoretical Physics in 1935.

These were depression years and positions were scarce. Dr. J. A. Stratton (then a young professor; later to become President of M.I.T.) brought to Millman's attention an opening as instructor in E. E. at The City College of New York. With Stratton's encouragement, Jack accepted the challenge to teach electrical engineering. His assignment included electromagnetics, circuit theory, measurements laboratory; but his primary responsibility was to introduce an electronics lecture and laboratory course into the curriculum. To create this course was a tremendous chore which (with the collaboration of Sam Seely) resulted in the publication of the textbook "Electronics" in 1941.

From 1942 to 1945 Dr. Millman was at the Radiation Laboratory at M.I.T. He was project engineer of the largest ground radar system developed during the war. Dr. Millman was promoted at C.C.N.Y. to Assistant Professor in 1942 and to Associate Professor in 1948. He joined Columbia University as Professor of Electrical Engineering in 1952 and served as departmental chairman from 1965 to 1968.

The successful "Electronics" text was revised in 1951. Because of his radar experience, Jack decided that it was important to introduce a course in pulse electronics into the curriculum. He interested Herb Taub to join him in this gargantuan task. After more than seven years of library research, laboratory experimentation. note writing, and trying out various methods of presentation on students. "Pulse and Digital Circuits" was born in 1956.

The impact of transistors required the updating of the above-mentioned books into "Vacuum-tube and Semiconductor Electronics" in 1958 and "Pulse, Digital. and Switching Waveforms" (the yellow book) in 1965. Finally. even greater emphasis is given to semiconductor devices (particularly the bi-polar transistor, the field effect transistor, and integrated circuits) in "Electronics Devices and Circuits" (the blue book) written with Chris Halkias and published in 1967.

Each of the above five books has been adopted by more than 100 E. E. and Physics departments in the United States. Over 25 percent of the books have been sold abroad. They have been translated into six languages: German, Hebrew. Italian, Japanese, Russian, and Spanish. Although written primarily as texts, these books have had wide acceptance in industry, and the yellow book was often referred to as the "pulse and digital designer's bible".

Dr. Millman was a [[IEEE Fellow Grade History|Fellow of the IEEE and of the American Physical Society. He received the Great Teacher's Award at Columbia University in 1967. He was the recipient of two Fulbright Grants. and has lectured on electronics in Rome, Frascati, and Milan, Italy; Catania, Sicily; Madrid, Spain; Haifa, Israel; Athens, Greece: Sao Paulo, Brazil; and Montevideo, Uruguay. He has been a consultant in radar and electronics to many industrial firms. He was a vice-president and director of CompuScan, Inc. an optical character recognition (OCR) firm founded by two former students. He received the 1970 IEEE James H. Mulligan, Jr. Education Medal.

Possibly as important as the vital stat1st1cs one can cite concerning Jack Millman's career is the simple statement signed by 20 students in the Columbia School of Electrical Engineering when Professor Millman stepped down as Head of Department in 1968, "We herein express our appreciation to 'Uncle Jack' for the human warmth and kindness he has brought to our school". He retired in 1976.

Jack admitted that to keep abreast of the ever-changing developments in electronics these thirty years and to document them in textbooks was always an arduous and often a very lonely task. He realized that without the understanding and patience of his wife, Sally, these accomplishments would have been impossible. The Millmans had two sons; Jeffrey and Richard. Besides playing with two grandsons, Jack enjoyed listening to classical music, swimming, walking, bowling, bridge, and "puttering around the house". Dr. Millman died in May 1991.

Retrieved from "https://ethw.org/w/index.php?title=Jacob_Millman&oldid=174203"
Categories:
This page was last edited on 27 February 2019, at 19:10.
About ETHW
Policies and disclaimers