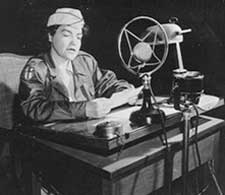 Journalist and radio pioneer Irene Corbally Kuhn was born in New York on 15 January 1900. Her career as a journalist began in 1921, when she followed the path of many writers and artist from the United States to work in Paris. There, she took jobs covering stories for American newspapers, such as the Chicago Tribune. Soon she moved to China, presumably to take an assignment with the Evening Star, an English-language newspaper published in Shanghai. There she met her future husband, journalist Bert Kuhn. After taking a leave of absence from the newspaper, moving to Hawaii, and giving birth to a daughter, Irene and Burt returned to the Evening Star in 1923.

At this point Irene Corbally Kuhn’s career changed due to the emergence of a new technology—radio broadcasting. In 1923 the Evening Star (like many newspapers around the world) opened its own radio station. Newspaper owners believed that radio broadcasting might ruin business for the printed papers, so they attempted to take control of the situation by themselves becoming broadcasters. Kuhn was asked to read the news on the air, and became the first person, male or female, to be heard by radio in China.

She described that first broadcast in detail in her 1938 autobiography, Assigned to Adventure. It took place on 14 December 1928 at station KRC in a back room in the China Press offices in Shanghai. As she put it, “with my legs melting under me like butter on a hot stove, I had stepped up before a ‘mike’ and sent my voice into the air, the first woman ever to broadcast in the Orient, and probably the first feminine announcer in the business.” While the studio was located at the newspaper’s office, the transmitting station was miles away, making it difficult for the announcers and the station engineers to communicate.

“We draped heavy cambric sheets across walls and ceiling of a cubicle opposite the editorial room. We set up a wall telephone which had to be cranked and was connected directly to the transmitting station a few miles away. [They] installed a microphone and a wheezy portable phonograph with a dozen or so records. . . Promptly at two minutes before six that first evening, I walked into the room alone, a sheaf of news dispatches from the British Reuters service in my hands. At one minute before the hour I unhooked the telephone receiver, cranked the contraption a few times, waited for a ‘click’ at the other end. Then I said ‘okay,’ replaced the receiver quietly and tiptoed over to the mike. We broadcast by guess and by God, for while the click was supposed to be the signal that the microphone was open and I might now begin the program, I never could be sure until after the twenty minute broadcast whether I was talking to myself in a vacant room or to a small but enthusiastic audience in widely distant places. After that ‘good evening, everyone,’ I played a phonograph record to give the sending station a chance to pick themselves up had anything gone awry. The musical interval also provided time for the funny homemade sets which had sprouted in Hong Kong, Soochow, Hankow, Peking and the outposts, to warm up before the ‘main event.’ This was the news report which I read. Then I closed with another phonograph record and made a speech before signing off, asking for details on reception. We got reports by the bale.” After serving as announcer for just a short time, Corbally Kuhn and her family were forced out of the city by a war. Unfortunately, Bert Kuhn died in 1926, and Irene returned to the United States with her daughter. She continued her work as a journalist, eventually working for the newspaper The World Telegram. She also had considerable success in the 1930 as a screenwriter for movie studios such as MGM, Paramount, and Fox. She published Assigned to Adventure in 1938, and it became a best seller in the United States and Great Britain.

In the 1940s Corbally Kuhn worked as a publicist for New York’s governor Thomas E. Dewey during his unsuccessful presidential campaigns in 1940 and 1944. She eventually returned to the radio business, although not as an on-air personality, when she worked for NBC in New York in the late 1930s and 1940s. She rose through the ranks at NBC to become assistant director for communications. From 1960 to 1968, she published a syndicated newspaper column, “In My Opinion,” and later she returned to the airwaves with a feature show called “The Kuhns,” which she co-produced with her daughter.

Retrieved from "https://ethw.org/w/index.php?title=Irene_Corbally_Kuhn&oldid=146124"
Categories:
This page was last edited on 28 January 2016, at 21:05.
About ETHW
Policies and disclaimers