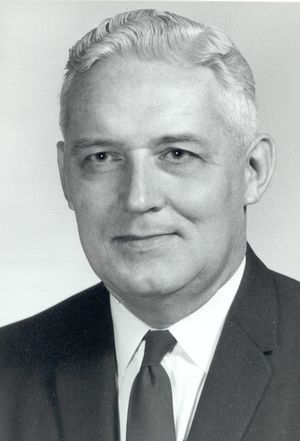 Ingolf Birger Johnson was born on September 29th of 1913. He was a native New Yorker and earned his BS (1937) and MS (1939) in Electrical Engineering from the Polytechnic University in Brooklyn. Thereafter he entered the employ of the General Electric Company, where he was on the payroll from 1939 to 1978. With a wide range of interests and skills, Mr. Johnson variably worked on economics, lighting arc and high voltage phenomenon, surges and surge control, power stations and equipment, and extra high-voltage series capacitor system design and application. After retiring in 1978, Mr. Johson worked as a industry consultant.

Mr. Johnson was a Fellow of IEEE and he has participated actively in Institute affairs. He has served as Past Chairman of the General Systems Subcommittee; Past Chairman and Vice Chairman of the Committee on Transmission and Distribution; member of the Protective Devices Committee; Secretary of the Lightning Protective Devices Subcommittee; and others. He organized the IEEE Working Group on Switching Surges under T. and D. and served as its chairman. In addition to IEEE was a member of the Conference Internationale des Grands Réseaux Electriques a Haute Tension where he is the U. S. National Representative to Committee No. 15 on Insulat ion Coordination. He held memberships in Eta Kappa Nu, Tau Beta Pi and Sigma Xi honorary Societies.

After several test assignments in the General Electric Co. in power transformers, circuit breakers, induction motors, and the Elihu Thomson Laboratory, Mr. Johnson worked as a Laboratory Engineer in the High Voltage Engineering Laboratory in Pittsfield, Mass. From 1941·1 942 he conducted the lightning investigation being carried on at the Empire State Building in New York City. Later he participated in the design of distribution transformers for electric utility systems, which was followed by work as a development engineer from 1943-1945 on high altitude ignition systems for military aircraft. He returned to the field of electric utility systems as an Application Engineer in the Central Stations Operations in Schenectady, N. Y., from 1945-1950. From 1 950-1958 he served as Manager. Power Systems Engineering in the Analytical Engineering Operations; from 1958-1961 as Manager, Transmission and Distribution Analytical Engineering; and from 1961-1964 as Manager, Advanced System Design in Electric Utility Systems Research Operation. In addition, he has served as chairman or co-chairman of joint task forces with utilities on field, laboratory, and analytical investigations of special transmission system problems. Presently he is engaged in the Electric Utility Engineering operations of General Electric.

His contributions in the progress of the industry are primarily in the field of understanding of surge voltage phenomena and to the reliability and economy of transmission and distribution systems as influenced by surge control and protection, insulation requirements, and insulation coordination. These contributions have been described in more than fifty technical paper publications which were authored or coauthored for presentation largely at meetings of IEEE, American Power Conference, and World Power Conference.

He has had overall responsibility for the conduct of General Electric's Power Systems Engineering Course, which is given yearly for approximately eight months to utility engineers from the U.S.A., Canada and abroad. He organized and taught the PSEC course in Surge Phenomena during its initial years and has continued on a part time basis in later years. Preceding PSEC he taught transients, traveling wave and transmission line theory to co-op students as a non-resident MIT instructor.

Mr. Johnson won numerous awards for his research and contributions to the field. He was awarded the William Martin Habirshaw Award by the IEEE 1966, "for his contribution to the reliability and economy of electric power transmission particularly as affected by insulation requirements, and to the understanding of surge voltage phenomena." Then he was honored with the Steinmetz Award of GE in 1975, the IEEE Centennial award of 1984, and the IEEE Lamme Medal in 1986.

He was a life fellow of the IEEE and a member of Le Conseil international des grands réseaux électriques (CIGRE) and of the National Academy of Engineering. At the IEEE, he was Chairman of the IEEE Transmission and Distribution Committee and of the Surge Protection Development Committee.

Mr. Johnson was married to the former Johanna C. Mortensen and they have two sons. They resided in suburban Schenectady where Mr. Johnson had been active in various programs of the YMCA, scouting, church functions and of the former Schubert Club. He is a member of the Edison Club and the Elfun Society. He served on the Church Council and was Deacon in charge of Building and Grounds of Zion Evangelical Lutheran Church in Schenectady, N. Y.

Retrieved from "https://ethw.org/w/index.php?title=Ingolf_Birger_Johnson&oldid=171918"
Categories:
This page was last edited on 18 December 2018, at 20:58.
About ETHW
Policies and disclaimers