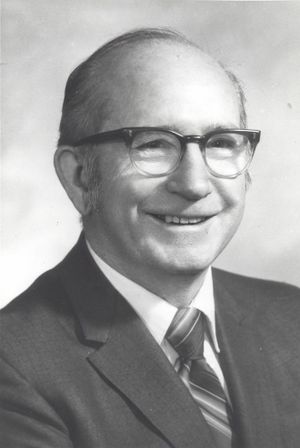 Howard C. Barnes was born in Terre Haute, Indiana, May 28, 1912. He was awarded a BSEE degree (with honors) in 1934 from the Rose Polytechnic Institute. He was The Chief Engineer, Senior Vice President of Chas. T. Main, Inc. with whom he became associated in January 1975 as Vice President and General Manager of the Power and Environmental Systems Division. Planning many aspects of the electrification of the Kingdom of Saudi Arabia over a 25-year period was one of the division's projects.

Mr. Barnes was formerly Deputy Chief Engineer and Assistant Vice President of the American Electric Power Company where his thirty-five years' experience ranged from system relaying and power plant control to research in UHV transmission levels in excess of two million volts. He also had a major role in the introduction of the first 765 kV system in the United States, and he sponsored and directed extensive research into the health and safety effects of electric power facilities, including major research by the staff of Johns Hopkins Hospital.

He was a contributor and author for technical societies and a lecturer at universities at home and abroad. He was founding president of the IEEE Power Engineering Society (PES), founder and chairman of the PES Power and Environmental Sciences Committee which focused on societal issues related to power engineering, and he was chairman of the PES Special Sessions Committee.

Mr. Barnes was elected a Fellow of IEEE for his contributions to control of power systems. In 1975 he received the Meritorious Service Award of IEEE Power Engineering Society for enhancing engineers' cognizance of societal need, and in 1977 received the IEEE Power Engineering Society Power-Life Award for significant contribution to the harmonious development of man and his environment.

Mr. Barnes was U.S. Advisor to the Conference Internationale des Grands Reseaux Electriques a Haute Tension (CIGRE) Study Committee on the Future of Electric Transmission and Power Systems, served as Chairman of its Study Committee responsible for technical guidance in developing future power systems throughout the world, and was Vice President of the Executive Committee of its U.S. National Committee.

In 1974 he was elected a member of the National Academy of Engineering for his contributions to development of high voltage transmission.

In 1977 he was awarded a Doctor of Engineering degree by Rose-Hulman Institute. He attended the School of Business Administration, University of Michigan and Adelphi University and the, Sloan School of Massachusetts Institute of Technology.

Retrieved from "https://ethw.org/w/index.php?title=Howard_C._Barnes&oldid=171991"
Categories:
This page was last edited on 20 December 2018, at 18:55.
About ETHW
Policies and disclaimers