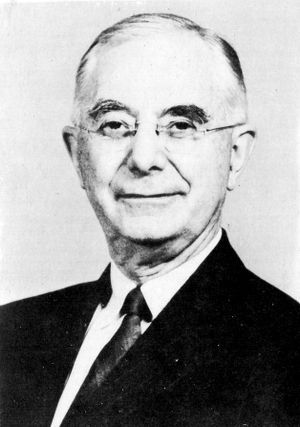 Herbert R. Stewart was born in 1902 in London, England. He came to the United States at an early age and attended schools in Addison and Woodland, Maine. He was graduated from Massachusetts Institute of Technology in 1924 with a B.S. degree and in 1925 with a M.S. degree. both in Electrical Engineering.

Mr. Stewart joined Westinghouse Corporation in October, 1925 at Pittsburgh as a central station engineer and in May, 1927 went to that company's Boston District Office in the same capacity. In May. 1934 he joined the New England Electric System as Protection Engineer.

During his long and fruitful career with New England Electric, he received several promotions and retired as the Systems only Senior Engineer in July of 1967. He served as a consultant to the System until July, 1972. Since severing connections with the New England Electric System, Mr. Stewart has continued to be active as a private consultant.

During Mr. Stewart's career with Westinghouse, he was importantly involved in a number of major projects, some of which were of worldwide importance. During his association with the New England Electric System, he has contributed importantly to the design of EHV transmission networks in New England including considerations of transient stability, protective relaying, and insulation coordination. He has been deeply involved in long-range planning for load growth in New England as affected by the characteristics and economics of all facets of transmission and generation. including studies for bringing Appalachian mine-mouth power to New England by means of 500 kv or 700 kv transmission and bringing Canadian power to Massachusetts by means of high voltage DC transmission from Labrador.

Mr. Stewart has always been very active in IEEE Boston Section affairs and served on a number of important national technical committees. He is well known internationally having served as the United States representative on a number of committees of the International Conference on Large Electric High Tension Systems (CIGRE) and was Vice President of the United States National Committee for CIGRE.

Mr. Stewart, a Fellow of the IEEE, was a Registered Professional Engineer and a member of Tau Beta Pi. He was the author or co-author of fifteen technical papers published in IEEE TRANSACTION, the Journal of the Franklin Institute, American Power Conference Proceedings, or the trade press. He was an enthusiastic and experienced tennis player and was active year-round in this sport.

Mr. Stewart and his wife, Winifred, resided in Waban, Massachusetts. They had a son, Robert, who was with Hazen & Sawyer, Consulting Engineers, in Raleigh, North Carolina.

Retrieved from "https://ethw.org/w/index.php?title=Herbert_R._Stewart&oldid=171978"
Categories:
This page was last edited on 20 December 2018, at 17:28.
About ETHW
Policies and disclaimers