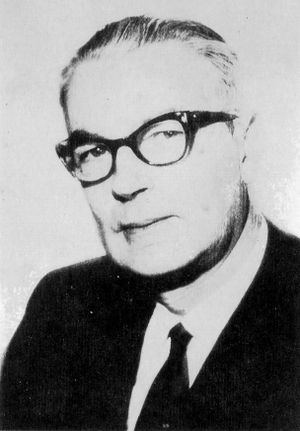 Gunnar Jancke was born on December 26, 1913 in Uppsala, Sweden. Although he was born and educated in Sweden. he has been working professionally all over the world, using Stockholm as his base. He graduated from the Royal Institute of Technology in Stockholm (1936) with a masters degree in electrical engineering. After graduation he worked for the ASEA company before joining the Swedish State Power Board in 1937. There he started in the Operations division, but was transferred to the electrotechnical division in 1946. He has held various development engineering posts prior to reaching his present position as chief engineer and deputy manager at the electrotechnical and thermal power division of the State Power Board.

Dr. Jancke was working on a 750 kV transmission system, which was scheduled to be introduced in Sweden around 1980.

Gunnar Jancke was very active in international organizations. He is a member of Cigre, IEC, Unipcde, IERE and IEEE. He is now member of executive committee of Cigre and 1958-64 he was vice president of IEC. He also serves on several subcommittees to these international organizations. He has attended conferences and given lectures on all continents.

Dr. Jancke has been a consultant at several large power transmission projects around the world. Notable are several projects in South America and the construction of the Canadian Hydro-Quebec 735 kV transmission system.

In Sweden, Dr. Jancke has served on several governmental and organizational committees dealing with standards, technical education, electricity law and other electrical questions.

Dr. Jancke had also published hundreds of papers in Sweden and internationally.

For his pioneering work in the field of power transmission, Dr. Jancke has received many honors. In 1961 he was named honorary doctor at the Technica1 University in Dresden, East Germany, and in 1966 he became honorary doctor at the Chalmers Institute of Technology in Gothenburg, Sweden. In 1966 he also became Fellow of the IEEE. Dr. Jancke is a member of the Royal Swedish Academy of Engineering Sciences and has received gold medal of the academy. He has also received the gold medal of the Swedish Standards Association.

On the personal side, Gunnar Jancke was a member of the Swedish Lutheran Church and had been active in Rotary for long time. He did not have much time for hobbies, but tried to entertain his friends as frequently as possible. He loved to take walks in the Swedish woods and enjoys gardening. He had a passion for crossword puzzles and rebuses. He took every opportunity to watch ice hockey on TV and had a certain weakness for westerns.

Dr. Jancke and Mrs. Jancke, the former Barbro Westergren of Riddarhyttan, Sweden, resided in Stockholm. They had two married daughters and had grandchildren.

Retrieved from "https://ethw.org/w/index.php?title=Gunnar_Jancke&oldid=171970"
Categories:
This page was last edited on 20 December 2018, at 17:16.
About ETHW
Policies and disclaimers