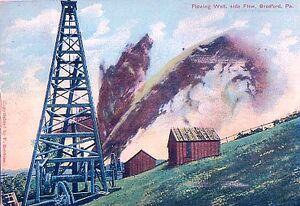 FIG. 1 Postcard celebrating the epochal gusher of Bradford, PA, an example of the outcome every investor would have been very glad to achieve. 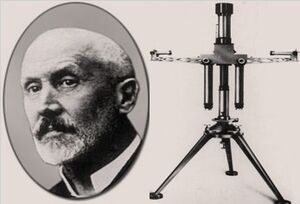 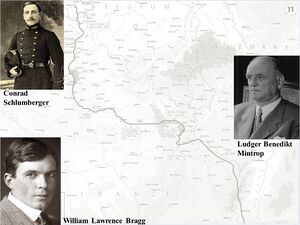 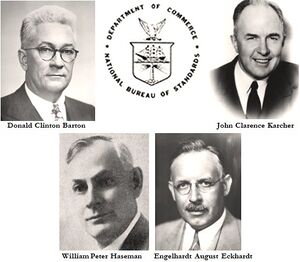 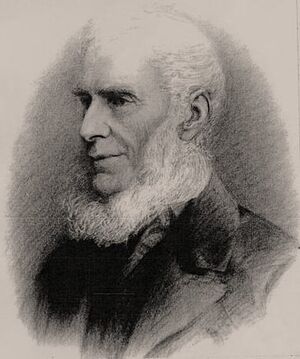 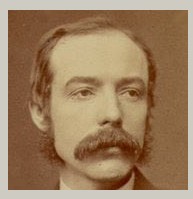 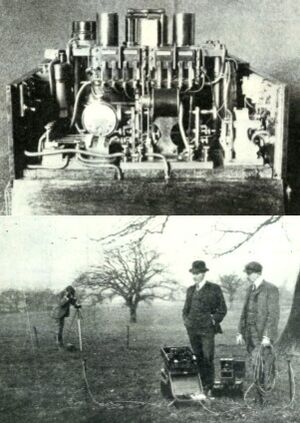 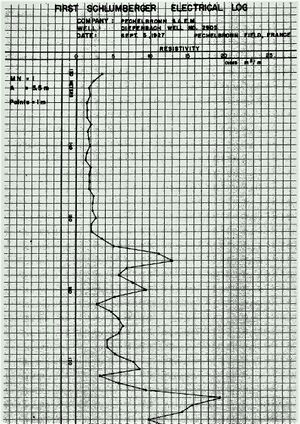 FIG. 8 Diagram of the first Carottage Électrique - Electrical Coring, completed in Alsace in 1927.

In the 1910-1920s, the average cost of a dry well in the United States was about $60,000 and 90% of the wells drilled were dry. Entrepreneurs were not happy to gamble, and would rather invest in lands certain to produce petroleum (Fig.1). The geologist eventually was acknowledged to be the professional capable to reduce risk but was in need for new artifacts and methods to explore and map petroleum reservoirs. The 1910-1930s were when geophysics as applied to petroleum exploration affirmed itself as a set of methods and technologies essential to verify the geologist's hypothesises. The geologist found a new partner scientist: the geophysicist of exploration.

Geophysics – the study of the physics of the earth – has had a very slow and largely academic development in the 1800s. The most important advancement in the discipline has been establishing and interpretating earth physics data and the measurement of the earth displacement through gravimetry, seismology, and magnetism.

Gravimetry: The torsion balance developed since 1888 by the Hungarian scientist Loránd (Roland) von Eötvös (1848-1919) led in 1915 to the first gravimetric survey for petroleum (Fig.2).

Between 1912-1916, in Romania and Czechoslovakia, Eötvös' torsion balance made use of the variations of the earth's gravitational field[1] according to differences in mass distribution near the earth's surface. Because the density of rocks varies, the gravitational force they exert varies also. The earth's gravity field is distorted by variations in the density of subsurface rock layers. One of the largest differences in density, and, thus, easily detectable by gravity-measuring instruments, is the one occurring between salt and the adjoining sedimentary rock layers. Porous rock layers pierced and bent upward by the rising salt (salt domes)[2] are excellent traps for petroleum and gas. These results were not publicized outside the domains of the Central Powers until after the end of World War I and were slow to attract attention in the oil industry until the successful application in the United States in 1919.

The limitations of the torsion-balance and pendulum methods led geophysicists to turn their attention to the development of gravity-meters, or gravimeters,[3] devices in which the gravitational pull on a mass is balanced against some form of elastic force. Instruments of this kind were built as early as 1899, but the first one which proved really effective in petroleum exploration was conceived on late 1920.

Another tool used at this time was the gravity pendulum. It is designed to swing in an air-tight case, in which the time required to make an oscillation is accurately measured. Tests were made at a number of points over a proven field to determine the force of gravity at these places. The same tests were then carried out in a new territory to show differences in the gravitational force, and thus give useful hints on the character of the sub-structure.

Seismology. The measurement of the earth displacement's in 1880 allowed the seismometer to receive attention. When in October 1914, the Western Front was stable in World War I, heavy artillery was of strategic offensive importance. The experience gained in using early seismic networks to locate the origin of distant earthquakes soon led to locating the artillery position of the enemy. French, British, German and American military staff dispatched several “seismic troops” in the battlefield, composed of scientists who specialized in reading the speed and radius of the propagation of the waves. Although none knew it at the time, with the involvement of physicist in artillery location the practice of seismic exploration for petroleum would arise. By then, geophysical exploration was considered the most reliable and efficient method to localize petroleum bearing formations in the subsoil (FIG.2).

The most relevant scientist in Europe to advocate for seismic technologies applied to mining was Ludger Benedikt Mintrop (1880-1956), a German geophysicist and seismologist. In 1917 Mintrop received a patent for a “Vibration Meter, a field seismograph determining the location of artificial vibration”. He founded the exploration company “SEISMOS” and successfully served petroleum companies in many parts of the world, and in Texas in 1924, achieved the first big petroleum finding ever by mean of seismic tools. (FIG. 3)

In the United States at the University of Oklahoma, in June 1921, a group of physicists leaded by John Clarence Karcher pursued the same steps of their German former enemy, now colleague and soon competitor. Karcher in 1917 designed a device to record artillery blasts during World War I (FIG.4). When he returned, he recorded dynamite blasts in a rock quarry and proved the existence of seismic reflections, and eventually developed the "practical procedure that could be developed into a useful device to identify reflections from a hard rock layer and to determine its depth below the surface." He then shared this idea with petroleum producers in the Oklahoma City area, and there started their legacy.

Magnetism. Observations of terrestrial magnetic anomalies were utilized in the ore finding for many years before coming into use for petroleum exploration. A magnetic profile,[4] incidental to the early torsion-balance surveys, was recorded in the petroleum fields of western Romania in 1913. The success of gravity and seismic methods in the United States in the mid-1920s sparked an interest toward the magnetometer, which showed some capability for structural reconnaissance in areas where crystalline basement rocks were involved in large uplifts. However, in spite of the low cost and rapid coverage, it proved to be an inferior instrument for petroleum searches.

The above described systems worked exclusively has surface methods. No probes, sensors, or microphones were physically lowered down the borehole. The only way to “watch and touch” the downhole strata for the geologist was to practice the coring or analyze of the drilling mud recollected in the vibrosieve.

The theoretical foundation for the utilization of electricity for mining prospection is rooted in the studies of scholars such as the Cornish Robert Were Fox the Younger, 1789-1877 (also remembered for being the first to prove the principle of the geothermal gradient)[5] (FIG.5). In 1830, he noticed an electrical phenomena in the walls of Cornwall mines, a natural electrical potential in the rocks of the subsurface. He published his observations on the Philosophical Transactions of the Royal Society in his On the electro-magnetic properties of metalliferous veins in the mines of Cornwall. In 1859, the German physicist Georg Hermann Quincke, 1834-1924, discovered and described the potential (later defined as Streaming Potential[6]) created by movement of a liquid through a semi-permeable membrane, which is a force utilized for the self-potential curve recorded in electric logging (FIG.6). In 1883, in the United States Fred Brown[7] measured electrical resistivity of rocks from the surface. This was the earliest attempt at surface exploration based on electrical properties.

Alfred Williams and Leo Daft, British mining engineers, devised a method at the beginning of the 20th century in which a low-frequency alternating current was sent into the ground by means of electrodes, and the resulting current distribution was studied by means of a sensitive telephone receiver connected to two search electrodes placed on the ground.

Between 1902 and 1905 they secured patents for the commercial use of potential-difference observations for resistivity and formed The Electrical Ore Finder Limited. Soon they were troubled by serious difficulties due to induction between the transmitter and receiver (FIG.7). They also noted that ore bodies changed the intensity of the electric field, and equipment could detect a lode but not its extension and richness. These technical issues much contributed to numerous unsatisfactory results. But the ultimate reason of their failure and bankruptcy in 1905 was that they collected the data only in a subjective manner with the listener device, without creating an archive of recordings to compare.

No records suggest that William and Daft proposed services, or were asked, to prospect for petroleum. Their methodology and technology (acoustic interpretation) has fallen into limbo, but was not entirely forgotten: there is evidence of the use of the identical principle in Sweden in the late 1910s).

Schlumberger's firm after 16 years (1911-1927) of study, experiments, and implementation of ores and petroleum research technology developed the downhole wireline system called in French Carottage Électrique - electrical coring: a set of tools and methods based on the electric resistivity used for the first time on September 1927 to detect differences in the porosity of the sandstones of petroleum fields (FIG.8).

At that time, the system represented a turning point in geophysics, but not a huge breaking point - at least, in its early years. It did not replace anything, but rather provided another valuable tool for the geologist to interpret the subsoil. It was cheaper to make a reconnaissance survey by seismic methods, but when a salt dome had been found, it could be studied more in detail using electrical methods; also, the mapping of faults related to the domes, generally impossible by any other geophysical method, is fostered by the electrical method. On the other hand, electrical coring had also limitations. Inaccuracies in the mapping according to the salinity levels of the water or the drilling mud can occur. Also, the presence of connate water, the formational pressure, and the electrode spacing can be source for disturbance. Electrical coring was not the “magic copper cable” capable to overtake the place of seismology and other methods, but was an important step ahead. Through the development and affirmation of the practice of electrical coring the geologists and geophysicists engaged together in petroleum exploration came into possession of a further, important work tool.

The surface measurement of the values ​​of gravity, magnetism, and the recording of artificially induced seismic waves were joined by the “in the well” recording of the characteristics of the rocks and fluids contained in them. Electrical logs in the 1930s entered the young and exclusive club of geophysical technologies applied to petroleum exploration. The petroleum geophysicist, a recently born category of industrial scientist, welcomed the new way of analyzing the stratigraphy of the terrains crossed by the borehole lining down of electric cables with interest and admiration.

Bates, Charles C., Thomas F. Gaskell, and Robert B. Rice. 1997. Geophysics in the Affairs of Man: a Personalized History of Exploration Geophysics and Its Allied Sciences of Seismology and Oceanography. Kent: Elsevier Science.

Miller, A. H. “The Theory and Operation of the Eötvös Torsion Balance with Plates I, II, III.” Journal of the Royal Astronomical Society of Canada 28 (1934): 1-32. Sweet, George Elliott. 1978. The history of geophysical prospecting. Sudbury: Neville Spearman.

Owen, Edgar Wesley. 1975. Trek of the oil finders: a history of exploration for petroleum. Tulsa: American Association of Petroleum Geologists.

Santschi, Roy J. 1931. Modern divining rods; a history and explanation of geophysical prospecting methods, including descriptions of instruments, and useful information for prospectors and treasure seekers.