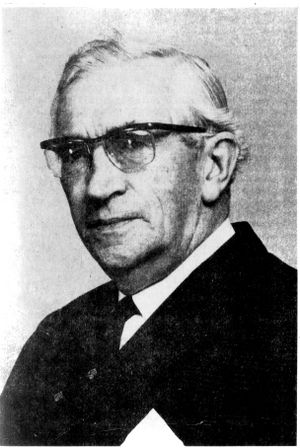 Francis John Lane was born in Bradford, England in 1902. He was awarded the B.S. (1924) and M.Sc. (1925) Degrees in E.E. by Leeds University. After a three-year student apprenticeship with the British Thomson-Houston Co., he advanced from a diagram draughtsman to Protective Gear Engineer at the Willesden Switchgear works. He joined the Central Electricity Board as Assistant Technical Engineer, South-East District in 1931, moving on to C.E.B. Headquarters, London in 1934, where he took charge of all design and performance problems of protective gear on the National 132kv Grid System, then in process of construction. Throughout the World War II he was responsible for development and co-ordination of system extensions in the North of England and in Scotland to meet war-time requirements. In 1945, as System Design and Development Engineer his responsibility for system design covered the whole of England and Wales and Southern Scotland, and he was appointed Deputy Chief Engineer (Transmission) to the Central Electricity Authority in 1953. When the Supply Industry was re-organised in 1957, he was appointed Chief Engineer (Transmission) to the Central Electricity Authority Generating Board, but left that post to join the Consulting Engineering partnership of Preece, Cardew & Rider (London & Brighton), remaining there until he retired in 1970. Since 1968 he has been Chairman of the Council of the Electrical Research Association, and Chairman of the Board of Directors since incorporation in 1971.

John Lane, a Fellow of IEEE, has served as Member-at-Large, Region 8, Power Group Executive, member UKRI Section Committee 1964-present and Chairman UKRI Committee. He was also a Fellow of IEE, having served as member IEE Council, and Chairman of the Measurement Section and of the Power Division. His principal specialisations have been in the areas of Protective gear, system design, and high-voltage transmission - particularly direct current, and he has written or co-authored a number of papers and articles on these subjects. He was stimulated by the success of the Sweden-Gotland lOOkv de connection to obtain approval for a 200kv 160MW connection between England and France, and subsequently to prepare a recommendation for the 600kv 600MW connection between North and South Islands, New Zealand. He has consulted on many other high tension interconnectors throughout the world. In recognition of his contribution to the British supply industry, he was appointed by King George VI in 1951 to be Officer of the Order of the British Empire (OBE).

John and his wife, Eileen, resided in the pleasant Sussex town of Bexhill-on-Sea, and enjoyed swimming, tennis, bowling, and singing with the local Church Society. John was an elder of the St. John's United Reformed Church. They had two daughters, both married and each with three children.

Retrieved from "https://ethw.org/w/index.php?title=Francis_J._Lane&oldid=171982"
Categories:
This page was last edited on 20 December 2018, at 17:37.
About ETHW
Policies and disclaimers