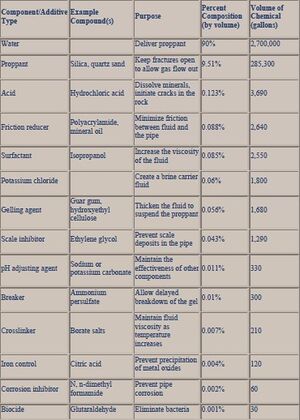 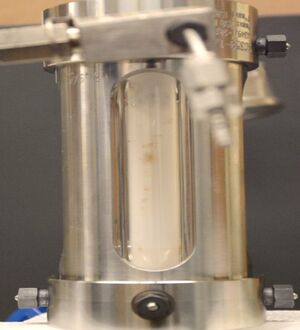 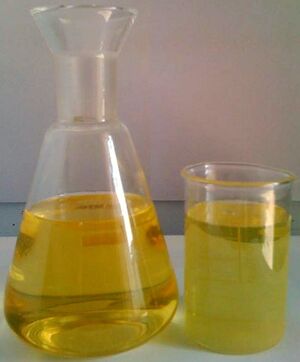 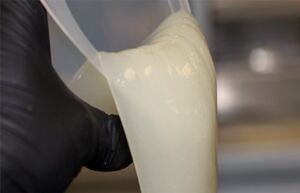 In the early days of the hydraulic fracturing practice, 1947 to 1952, fracturing fluids (then called solutions) were petroleum-based and included crude oil and gasoline thickened with napalm[1] (naphthenic-acid and palm-oil). In 92% of the nearly 24,400 early treatments done before 1953 (reported in the 2011 IHS database), the fluids/solutions used were classified “unknown”. For the remaining 8%, the solutions/fluids were described as water, crude petroleum, explosives, and acid compounds. The technical literature of the time reflects the transition (1953-1958) from fracturing using explosives or acid etching (without the use of proppants) toward the concept of hydraulic fracturing implemented through the injection of crude oil-based fluids and sand to prop-open the fractures (the latter process was developed originally for stimulating sandstone formations).

Since the mid-1950s, hydraulic fracturing technology fracturing fluid is composed of three elements: the base fluid, the proppant agent, and the chemical additives (also called agents). Water was permanently introduced as the main base fluid in 1953; this was the first groundbreaking development for this technology since it corresponded to a substantial increase in the number of records of hydraulic fractured wells in the USA.

The proppant is a solid material, typically sand, treated sand, or manmade ceramic materials, which is conceived to keep the induced hydraulic fracture open during and after the fracturing treatment. Sand proppant is today used for the 99% of the hydraulic fracturing operations, while the far more expensive ceramic, resin‐coated ceramics,[2] resin‐coated sand, and bauxite proppant cover the remaining 1%.

In the 1950s the evolution of numerous additives/agents took place, each designed to improve the fracturing process, adopted depending on the commodity type (petroleum or gas) to produce, and the relative characteristics of the reservoir. In the 1960s, gelling agents (e.g. guar gum)[3] were introduced, and some cellulose derivatives finalized to increase density and viscosity of fracturing fluids. The industry required that fluid mixes were capable of suspending proppants both at high and low temperature; that leaded corporate and government (the latter often through academy) R&D units to crosslink polymer additive with potassium pyroantimonate[4] at low pH, borate at high pH, or aluminum.[5]

Liquid CO2 was initially introduced in the early 1960s for use with water or oil‐based treatment fluids; later it was applied as a sole carrier fluid to gas‐lift the liquid back to the surface after the completion of the treatment. In the late 1970s, were tested and used foam‐based fracturing fluids produced with pressurized nitrogen (N2)[6] or carbon dioxide (CO2)[7] additives to stimulate shallow low‐pressure zones such as coalbed methane (CBM)[8] production.

Since the early 2000s, Slickwater Fracturing[9] is the most diffused practice (easy and cost effective) for well stimulation to increase the recovery of tight and shale gas. The fracturing fluid utilized is composed primarily of water and sand (>99%) with additional chemicals added - friction reducers, surfactants, and possibly other contents such as polyacrylamide,[10] biocides,[11] electrolytes, and scale inhibitor in variable quantities - to increase fluid flow velocity, sand transport and to reduce friction, corrosion, and bacterial growth during the stimulation process. The rise in slickwater fluids utilization coincided with more than 58,000 directional and horizontal wells drilled between 2000 and 2010. The majority of the drilled wells in the USA were vertically, but the proportion of newly horizontal/directional drilled wells rose from 6% in 2000 to 42% in 2010. About 73% of horizontal well treatments during this period were used to produce natural gas; the remained portion produced crude petroleum.

The US Environmental Protection Agency (US EPA)[12] reports that 50,000 up to 350,000 gallons (1.574 - 11.021 tons) of water are requested to fracture one well in a coalbed formation; numbers can raise to 2-5 million gallons (62,983 - 157,458 tons) to fracture one horizontal well in a shale formation. Almost all the fracturing fluid pumped during a multistage horizontal well fracturing operation serves to open a network of natural fractures - but not necessarily provokes significant contribution to the productivity of the wells.

Conventional fracturing is typically used in both vertical and horizontal wells and in low‐permeability, or tight reservoirs[13] (i.e. sandstone), generally below a depth of 3000 meters. A water‐based gel fluid is used with a medium proppant loading and 4-5 pumps operating at a combined rate of up to 5 m3 of water per minute; this technique creates long, very fine fractures. Upon completion of the injection process, the internal pressure of the rock formation causes fluid to return to the surface through the wellbore. This fluid is known as both flowback or produced water: it contains the injected chemicals plus other constituents such as naturally occurring materials: brines, metals, radionuclides,[14] and hydrocarbons. The flowback and produced water is typically stored on‐site in tanks or pits before treatment, disposal, or recycling. In many cases, it is injected underground for disposal, but injection is not always an option. The flowback may be treated and reused or processed at a wastewater treatment facility and then discharged to surface water.

Classes of Fluids: a brief review

Since the beginning of hydraulic fracturing practices, sets of different fluids have been developed over the years and capable to optimize the circulation of proppants, withstand the high pump rates, shear stresses, high temperatures and the pressures that fracturing fluids have to sustain. Here three of the most representative classes are briefly explained.

Foamed fracturing fluids have been utilized in hydraulic fracturing since the late 1970s. They are generally composed of the 75-80% in gaseous nitrogen or carbon dioxide (CO2) and for the 20-25% in water, are relatively clean, have good proppant suspension and carrying capabilities, and provide relatively easy cleanup of formation and fractures (Fig. 2). Very recently there have been experiments by the University of Texas at Austin, upon request of the U.S. Department of Energy, ultra-dry CO2-in-water foams (water content down to 2-5% range), and similar nitrogen-in-water foams, very efficient at high temperatures and pressures. This breakthrough achievement, when implemented in commercial scale, will dramatically help to mitigate the issue of the treatment and discharge/disposal of flowback water, which currently carries economic and environmental challenges.

Costs of foamed fracturing fluids is convenient for shallow to medium depth wells because minor amounts of liquids and additives are required. They become less cost effective at increased depths because more nitrogen is needed to produce foam at greater pressures. Further, more pumping horsepower is required at greater depths to compensate for the relatively low fluid density of the material that is being injected to overcome the relatively high fracturing pressures. In some cases, it may not be possible to get the desired maximum proppant concentrations because the proppant must be blended with the fluid portion of the foam before being mixed with the gas.

Viscoelastic surfactant fluids have a gelatin-kind texture and are an excellent particle suspension medium (Fig. 3). They are composed of water soluble salt (such as an ammonium or potassium chloride) and an organic stabilizing additive selected from the group of organic salts (e.g. sodium salicylate), thickened through quaternary cationic ammonium surfactants.[18] It also presents less of a cleanup problem of formation fractures when compared to polymer based systems. The viscoelastic surfactant fracturing fluid can be broken by contact with formation water or oil and; it needs no internal breakers to reduce viscosity so that it can be easily removed from the formation.

A potential problem with the above described viscoelastic surfactant system is that cationic surfactants can coat with an oily film formation rocks, which would increase the resistance of the petroleum flow through formation pores - a water wet formation is more beneficial for production than an oil wet formation. Application of the above viscoelastic surfactant system is also restricted to temperatures below about 110° C.; and, it results to be most effective at temperatures below about 80° C.

Crosslinked fracturing gels were first experimented wuth in the late 1960s, introducing innovative technical features that allowed them to overcome in quality and outcomes the simple water-based gels used in the United States (Fig. 4). Their point of advantage was the very high viscosity yields (about 20,000 centipoises)[19] for modest polymer concentration, which made them ideal for carrying higher concentrations of proppants due to inherent high efficiency.

Crosslinked fracturing gel are composed of aqueous liquid, a gelling agent, and a crosslinking compound. The aqueous liquid is used to hydrate the gelling agent prior to crosslinking, and it must be of a pH which is compatible with the crosslinking compound used to crosslink the hydrated gelling agent. Most important, it has to be clean from impurities of a size sufficient to clog either the oil well tubing or conduit or the pumping equipment used to push the fracturing gel into the formation. Given the high viscosity, crosslinked fracturing gels works well even without a lubricating layer between the fracturing liquid and the well tubing, which substantially reduces costs and operational time; and, it can be easily pumped into the formation with pumping equipment and tubular goods normally available at a wellhead.

Retrieved from "https://ethw.org/w/index.php?title=Fracturing_Fluids&oldid=185940"
Categories:
This page was last edited on 13 August 2021, at 19:16.
About ETHW
Policies and disclaimers