My research over the past 7 years on the works and the contributions of the Centre Electronicque Horloger (CEH), Neuchâtel, Switzerland in its early phase under the direction of Roger Wellinger resulted basically in two new findings: First the very first Quartz Wrist Watch (QWW) worldwide was very probably Beta 1 in July, 1967, not Beta 21 as postulated by the Swiss watch industry, and secondly the leaders and innovators, the makers and inventors were some much different peoples than what were celebrated and extensively honored in the past 40 years. Here are some of them:

The picture below shows the crew which assembled the first Quartz Wrist Watch (QWW), called "Beta 1" in July, 1967 at the Centre Electronique Horloger (CEH) in Neuchâtel, Switzerland. The watch with designation CEH-1020 had been delivered in August, 1967 to the observatory in Neuchâtel for its famous yearly "Concours Chronométrique". The picture had been taken in September 1967 by Richard Challandes, at the occasion of the Observatory announcing the record breaking ranking result of 0.189. The "Montre bracelet à quartz" project had been officially started in November 1965. 1) The watch represents a milestone in the evolution of electronic timekeeping. 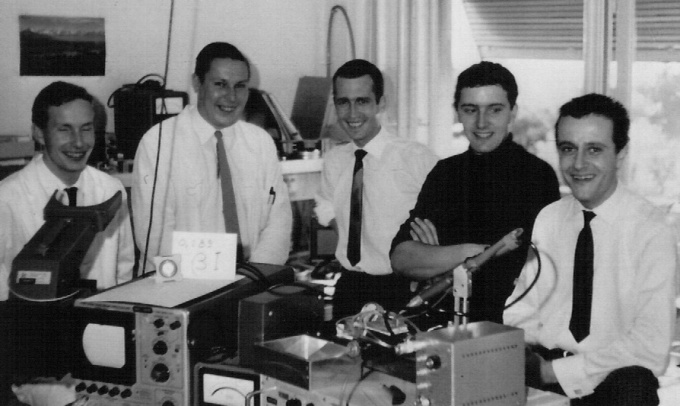 The persons on the picture can bee identified from left to right: Charles-André Dubois, technicien horloger, François Niklès, technicien horloger, Jean Hermann, ingénieur électronicien EPUL, Richard Challandes, technicien horloger, Charles Frossard, technicien horloger. As opposed to the CEH governing assembly and its president and many other "illustrious personalities" in the well regulated Swiss watch industry the people on the picture really did believe in quartz wrist watches, which can be readily concluded from there smiling faces. - Worth mentioning one floor above was located the very first semiconductor pilot line in Switzerland, under the direction of Kurt Hübner, physicist ETHZ and his outstanding crew, who produced and delivered the first low power integrated circuits (IC) needed to operate the QWW, an other "first" by the CEH. - Amongst the equipment and instruments in front one can see a Tectronix oscilloscope and a hp frequency synthesizer. On the scope is placed a honorary plate and a hand written document indicating: "0.189" and "Beta I". Photo copyright R. Challandes, courtesy J. Hermann, who has been very helpful in historical research on the first QWW.