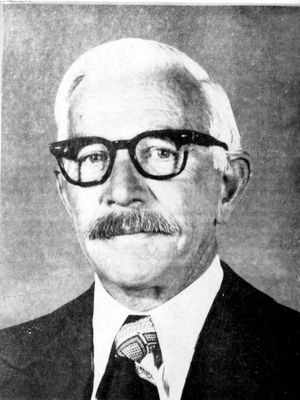 Everett J. Harrington (Ev) was born in Marshfield, Oregon in 1911. He received his engineering education at Oregon State College, graduating with a B.S. degree in electrical engineering in 1934.

Mr. Harrington came to work at Bonneville Power Administration in 1939 as an engineering draftsman. He progressed in the organization, holding positions of Test and Development Engineer, Chief of Branch of System Engineering, and Assistant Chief Engineer and Engineering Manager, holding the latter position at the time of his retirement in January 1972.

While at BPA, Ev developed new and unique methods of performing staged tests of high-voltage power systems and equipment. His contributions to the design and application of circuit breakers in BPA's power transmission system were substantial. Among these were great increases in fault interruption capability, better line switching and control of switching surges to limit overvoltages. These resulted in improved system transient performance and permitted substantial reduction in insulation levels, tower weight, rights-of-way requirements and in transmission lines. Resulting cost savings were measurable in millions of dollars.

He has received numerous awards in recognition of his outstanding work including the Distinguished Service Award, the highest honor of the Department of the Interior. He authored and co-authored numerous technical papers and articles. Ev was a Fellow of IEEE and was been active in IEEE activities.

In January 1972, Ev retired from BPA to spend more time on his interests in farming, building, mechanics, hunting and skiing. He was a real enthusiast in all of these areas. He and his wife Ginny, have built a beautiful home on their 80-acre ranch near Sisters in Central Oregon. Ev was a master "tinkerer", spending a great deal of time redesigning, overhauling and repairing his farm machinery. As a consequence, he has not had enough time for skiing or hunting. Ev continued to maintain an active interest in electrical engineering, and served as a consultant to BPA and others when his retirement activities permitted.

Ev and Ginny have three children, a son Steve, a Ph.D. in Physics doing research work at the University of Washington, a daughter Susie, living at home and planning to attend art school in the future, and a daughter Beverly Bow, residing in Eugene, Oregon.

Retrieved from "https://ethw.org/w/index.php?title=Everett_J._Harrington&oldid=187955"
Categories:
This page was last edited on 19 April 2022, at 20:30.
About ETHW
Policies and disclaimers