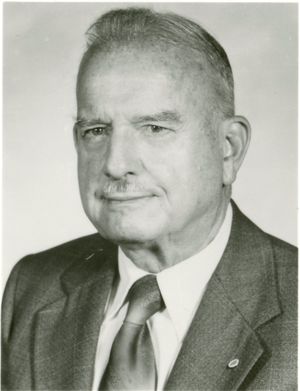 He was employed by General Electric Company in its Test Course and then became a member of GE's high-voltage engineering laboratory staff. In 1927 he left GE to become an electrical engineering instructor at Oregon State University, becoming a full professor in 1939. Mr. Starr served as a part-time consultant to Bonneville Power Administration from 1939 to 1954.

ln 1954 he became BPA's Chief Engineer. Since 1961 he has served Bonneville as Consulting Engineer specializing in EHV a-c and d-c transmission and in nuclear power development.

He has won several prizes for his research papers in the fields of high-voltage engineering and aircraft radio coordination. In 1965 he was named Engineer of the Year for Oregon.

In 1958 the Department of the Interior presented him with its highest award, the Distinguished Service Award and Gold Medal for his service to the Government in electrical engineering and nuclear power fields. In 1965 he was appointed a member of the Federal Power Commission's Alaska Power Survey and is serving as chairman of the study committee on Coordinated System Development and Interconnection.

He was a member of Eta Kappa Nu, Tau Beta Pi, Sigma Xi, and Phi Kappa Phi honorary societies. His contributions to the profession of the industry are primarily in the fields of high-voltage transmission reliability, large-scale application of series capacitors and the application of hvdc transmission techniques. He has published more than 40 papers.

Mr. Starr was married to the former Oma Mae Herald. They made their home in Portland, Oregon, where Mr. Starr relaxed caring for his suburban acre and with his hobbies of big game hunting and firearms.

Mr. Starr was a fellow of the IEEE, which awarded him the Habirshaw Award in 1968 “for outstanding contributions to the development of more economical and reliable a-c and d-c transmissions,” and the Lamme Gold Medal in 1980 for his lifetime contributions to the same field. He was also a member of CIGRE and the National Academy of Engineering.