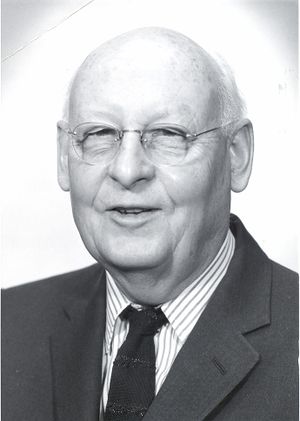 Edward W. Kimbark was born on September 21, 1902, in Chicago, Illinois. He grew up in Evanston, Illinois, on the shore of Lake Michigan. He attended the College of Engineering of Northwestern University in Evanston from 1920 to 1925 and received his Doctor of Science Degree in 1937 from Massachusetts Institute of Technology.

A highlight of Dr. Kimbark's career in education was teaching for four years at the Technological Institute of Aeronautics in São José dos campos, Brazil, where he was also Acting Head of the Division of Electronics for two of the four years. He conducted all classes in Portuguese. While living in Brazil, he enjoyed many hobbies, including horseback riding through the back country.

He was a well known author of books on power system stability, transmission of power and signals, and direct-current transmission. He has also written many technical papers and discussions.

Among Dr. Kimbark's many interests was that of amateur radio buff. He was a member of the American Radio Relay League and passed on telegraphic messages by spark transmission on his radio station 9AMZ. Another topic of interest for Dr. Kimbark has been the development of artificial international languages.

Dr. Kimbark's wife, Iris, was also employed at the Bonneville Power Administration. He and his wife resided in Portland, Oregon.

Retrieved from "https://ethw.org/w/index.php?title=Edward_W._Kimbark&oldid=172000"
Categories:
This page was last edited on 20 December 2018, at 19:33.
About ETHW
Policies and disclaimers