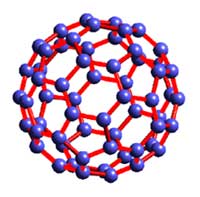 A buckyball is a molecule called Buckminsterfullerene. Composed of 60 carbon atoms formed in the shape of a hollow ball, buckyballs have, as yet, little practical use, although they do make up nanotubes, which have some uses.

The story of buckyballs begins in 1985 in the laboratory of British astronomer Harold Kroto. Looking at “Red Giant” stars billions of miles away, Kroto was puzzled by the long chains of carbon atoms that his instruments told him these stars emitted. He joined American scientists Richard Smalley and Robert Curl, who were studying similar chains or clusters of atoms in the laboratory. Together, they devised instruments to allow them to simulate the heat and pressure of a Red Giant to study these clusters. To do this, they put carbon in a helium-filled chamber and vaporized it with a laser. The resulting carbon molecules held exactly 60 carbon atoms, arranged into a roughly spherical shape. The molecule resembled something theorized by the Australian physicist Tony Haymet, who called this molecule “footballene” because he reckoned it looked something like a soccer ball (or “football” in Aussie English). But to Kroto and others it reminded them of something from the field of architecture—the futuristic “geodesic” domes invented by Buckminster Fuller in the 1930s. So they gave this new molecule the name “buckminsterfullerene,” and although it is usually shorted to “fullerene” or “buckyball,” the name has stuck. 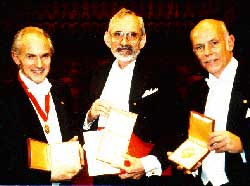 Buckyballs generated a lot of excitement in scientific circles, and earned Curl, Kroto, and Smalley a Nobel Prize in 1996, all before any good use for them had been dreamed up. Nonetheless, scientists looked for ways to manufacture them in larger quantities, if only to explore their unique properties. Buckyballs, they were discovering, could bounce, return to their original shape if squeezed, and spin at amazingly high speeds. By 1990, experimenters in Germany and the U.S. had figured out that simply creating an electric arc between two sticks of carbon (the exact same process used in carbon arc lamps) produces soot with large numbers of buckyballs in it. And by using a slightly different process to make the soot, scientists were able to make carbon molecules in the form of tubes, or even tubes-within-tubes. These tubes became known as nanotubes.

Still, though, there were no apparent uses for these scientific curiosities. After several years of looking, researchers finally began to put them to use; tiny nanotubes, which are similar to buckyballs but tubular in form, have been adapted to serve as the probe-tips of Atomic Force Microscopes. Others have experimentally tried using these carbon balls and tubes as chemical “sponges,” super-fine filters, or even (because they are hollow) as carriers for drugs or other chemicals. In the field of electronics, buckyballs and nanotubes have also been used in the laboratory to demonstrate tiny wires, transistors, and other electronic components.

Now over a decade old, the buckyball has created a lot of excitement but is still in its infancy as a commercial product. The slow progress in finding practical applications has not, however, discouraged the hundreds or thousands of companies and individual scientists investigating ways to make or use these interesting new molecules.

Retrieved from "https://ethw.org/w/index.php?title=Discovering_the_Buckyball&oldid=119993"
Categories:
This page was last edited on 14 September 2015, at 17:40.
About ETHW
Policies and disclaimers