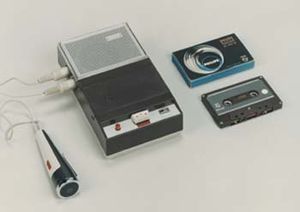 A Phillips Carry-Corder cassette recorder from the mid-1960s.

In the 1950s, magnetic tape looked like the obvious replacement for the disc, but it fizzled. It came roaring back in the early 1960s in the form of the Phillips “Compact Cassette,” today simply called the cassette. Although the cassette would move to the forefront of high fidelity audio, it originally appeared as a child’s toy. In 1962 the Phillips Company of Eindhoven, The Netherlands introduced the cassette and cassette player to the European market. Less expensive than its predecessor, the reel-to-reel recorder, the cassette was aimed at a new market—ordinary people willing to sacrifice sound quality for inexpensive recordings. Introduced in the United States in 1964, the medium was an instant hit with teens. At first it was just a fad, but later young people used blank tapes as a way to share recordings and create a music collection at very low cost.

Pre-recorded cassette tapes sold poorly, however, because albums offered better sound quality and were often less expensive. The cassette remained the medium of choice for making inexpensive recordings at home, while another form of cartridge briefly stole the market for pre-recorded albums on tape. In 1965 William Lear introduced an 8-track tape player, a new tape cartridge to use in cars. It quickly became one of the most popular options for new cars in the United States, and became the first truly successful portable tape product. But what the 8-track could do well, the cassette could do better, and by the middle 1970s it was catching up. Pre-recorded cassettes were a little cheaper than eight track tapes, and they were considerably smaller and more convenient. When the quality of automobile cassette players improved in the mid-1970s, more and more people abandoned the eight track. Although it started as a cheap format for teens, engineers made so many improvements to the basic cassette technology that pretty soon it was acceptable to include it in "hi-fi" home audio systems. Dolby noise reduction and improved forms of tape created especially for the cassette helped improved its sound quality so that it nearly equaled that of the LP record.

The success of the cassette as both a format for making home recordings and for listening to purchased albums came together in the 1980s. LP sales went into decline, and by about 1990 few phonograph discs were being released. But the fall of the cassette was rapid. The Compact Disc, introduced in the early 1980s by Phillips and the Sony Corporation, was slowly gaining ground. Within ten years, the cassette was clearly going the way of the LP, although blank cassettes for home recording continue to be used.

Retrieved from "https://ethw.org/w/index.php?title=Cassette_Tapes&oldid=154780"
Categories:
This page was last edited on 12 April 2017, at 13:52.
About ETHW
Policies and disclaimers