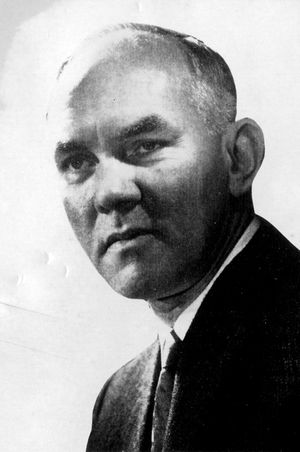 Howard Vollum was born on May 31, 1913 in Portland, Oregon. He graduated in 1936 from Reed College with a B.A. in Physics. For thirty-five years, Howard Vollum has personally contributed to the progress of electronics. Technology advances only as fast as quality measuring instruments allow. Development of the laboratory oscilloscope, a major such instrument, owes a large debt to this one man. In postwar years, while many companies failed to improve the oscilloscope, Howard had the clear conception that it could be a universal test instrument. He built his first scope while a student at Portland's Reed College. In his work, he developed an appreciation for getting the best possible measurement, an appreciation that permeates his Tektronix organization.

In the service in England during World War II, his engineering work on high-resolution radar earned the Legion of Merit from the U.S. government. Later, working at Evans Signal Laboratory, Belmar, N.J., he received an Oak Leaf cluster for developing a highly successful mortar-locating radar.

But his major contributions to electronics are intertwined with those of Tektronix, Inc., the company he helped found in 1946. He then coupled his concept that a volume-produced, fairly priced oscilloscope could become a universal instrument, to two others: That it be oriented to the technician user, and marketed directly by the company. Tektronix remains the world's leader in oscilloscope development; sales for the last twelve months exceeded $185 million.

Howard's technical concern has been both specific and general (for instance, insistence on improving instruments without waiting for competition to force improvement). It has been his vocation, and his avocation; he loves nothing better than to talk technical ideas, and to support others in their pursuit of such ideas. His personal encouragement and financial aid have helped enable the formation of new Oregon businesses among them Field Emission Corporation and Rodgers Organ Company, and of Oregon Graduate Center for Study and Research.

His earlier contributions included: The type 511, in 1947, which revolutionized oscilloscope design; the 512, first direct-coupled high-gain scope; the type 104 generator, first to use square waves for transient testing of scopes; and the plug-in unit, which, by letting a scope accept interchangeable units, gave the user , in effect, several instruments in one.

Mr. Vollum, a Fellow of IEEE, was awarded the following honorary degrees: Doctor of Science, Univers ity of Portland in 1955; Doctor of Law, Lewis and Clark College in 1967 and Doctor of Humane Letters, Pacific University in 1968. The University of Oregon bestowed on him the Distinguished Service Award in 1960 and in 1964 he was presented the Medal of Achievement Award by the Western Electronic Manufacturer's Association.

Howard was trustee or board member of Reed College, University of Portland, Oregon Graduate Center, the Governor's Economic Development Council, and severnl business and financial institutions As the Tektronix board chairman, he remains its chief executive. His outside interests included his family, tennis, photography, organ music, and, always, stimulating technical conversation.