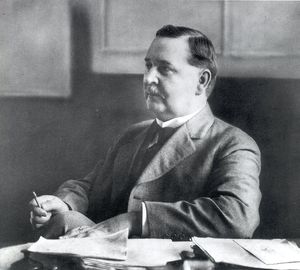 Benjamin Lamme was born on a farm near Springfield, Ohio, on 12 January 1864. He graduated in mechanical engineering from Ohio State University in 1888. His older sister Bertha Lamme was also an engineer, also graduating from Ohio State University in 1893. After a few months back on the farm, Benjamin joined the Westinghouse Company in 1889 where he became an assistant to Albert Schmid, well known for his innovative machine designs. Lamme designed a single-reduction railway motor with machine-wound coils which was marketed by Westinghouse beginning in 1891. He designed much of the apparatus for the Westinghouse exhibit at the Columbian Exposition in Chicago in 1893, including alternating-current generators, induction motors, and rotary converters.

Over a period of several years, Lamme developed a design methodology based on the field-form method of analysis. He later wrote that his method had "proved of incalculable value, especially in the analysis and development of new types of apparatus. "He did much of the work on perfecting the methodology at night at his home.Unlike many contemporary designers, he avoided using the mechanical slide rule, preferring instead his well developed "mental slide rule." The method was utilized in designing all types of electrical machinery and involved direct calculation of magnetic flux in air gaps.

In addition to his design work on the Niagara Falls alternators, Lamme designed the "monster machines" for the power plant of the Manhattan Elevated Railway in New York City. The plant used eight slow-speed direct-current generators, each of which was forty feet high and weighed approximately a million pounds. Lamme was responsible for designing the popular type C induction motor which came on the market in 1896 and was described at the time as having performance characteristics that were "unsurpassed." He used a technique of reducing the voltage applied to the motor when starting to limit the surge in line current.He was among the leaders in the introduction of large turboelectric generators which began to supplant older slow-speed, engine-driven, generators in the first decade of the 20th century.He later wrote in his autobiography that he had "always liked high speed" and thus had become and enthusiastic participant in "the race for higher speeds" in the field of electric machinery.

Lamme became chief engineer at Westinghouse in 1903 and held the position for the rest of his life. During World War I, he represented the American Institute of Electrical Engineers (AIEE) on the Naval Consulting Board. He received the Edison Medal of the AIEE in 1919 in recognition for his contributions to the electrical power field. For a number of years, he taught in-house design classes to young engineers at Westinghouse.Those who had studied under him organized a club known as "Laminations" which featured invited lectures by Lamme and others. Lamme himself received more than 160 patents during his career.

Lamme had a lifelong interest in archeology and had a sizable personal collection of projectile points and other artifacts.He was also an amateur photographer and had an interest in mathematical puzzles.

He died on 8 July 1924 at the age of 60. His will included a bequest to AIEE which was used to initiate the Lamme Medal in 1928 to recognize outstanding design engineers in the power field. He also endowed two engineering scholarships at Ohio State University, and contributed to the support and education of a number of French orphans after World War I. His autobiography, which included a list of his published papers, was published in 1926, and the Westinghouse Company published a collection of his technical papers in 1919.

Retrieved from "https://ethw.org/w/index.php?title=Benjamin_G._Lamme&oldid=145349"
Categories:
This page was last edited on 18 January 2016, at 21:36.
About ETHW
Policies and disclaimers