Bertha A. Lamme was born on a farm near Springfield, Ohio on 16 December 1869. She attended Olive Branch High School in Bethel Township, Ohio. (Little is known about her early or personal life.) Bertha entered Ohio State University in September 1889, and graduated in 1893, with a degree in mechanical engineering with a specialty in electricity. Her Thesis was entitled “An Analysis of Tests of a Westinghouse Railway Generator”. Bertha Lamme will be remembered as the first women to earn a degree in electrical engineering. After graduation she went to work for Westinghouse as a motor designer.

Her Brother, Benjamin C. Lamme (1864-1924), also attended Ohio State University (1888) and, upon graduation, went to work for Westinghouse in Pittsburgh. In addition to his design work on the Niagara Falls alternators, Lamme designed the "monster machines" for the power plant of the Manhattan Elevated Railway in New York City. Benjamin became the Chief Engineer at Westinghouse. In Benjamin’s autobiography (1926), Bertha wrote

“I have been asked to tell of his (Benjamin’s) influence on leading me into an engineering course for my college work. I cannot recall that he ever directly urged me to study along such lines, but he must, by suggestion and his own enthusiasm for such work, have led my mind in that direction. I had no aptitude for mechanics…but I did have a liking for mathematics. For this reason, he probably thought I would succeed in engineering.” 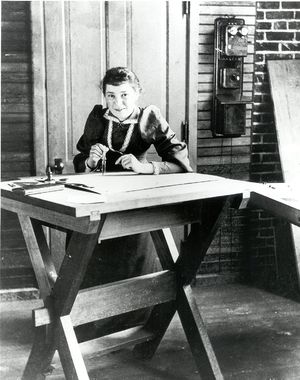 Shortly after her graduation, Bertha also went to work at Westinghouse. Benjamin Lamme describes her entrance into the company:

“…my sister…had taken an Engineering degree in the Ohio State University, more for the pleasure of it than anything else; but sometime, later, Mr. (Albert) Schmid (Shop Superintendent) gave her a serious invitation to enter the employ of the company, and so she took up the work of calculation of machines and stayed until she married.”

In 1905, Bertha married Russell Feicht, her colleague at Westinghouse and a fellow graduate of Ohio State University. Her husband went on to become director of engineering at Westinghouse, but Bertha’s twelve-year professional engineering career came to an end with her marriage. In 1910, their only child, Florence, was born. Their daughter went on to become a physicist for the U.S. Bureau of Mines in Pittsburgh, Pennsylvania.

Bertha passed away on 20 November 1943, in Pittsburgh, Pennsylvania.