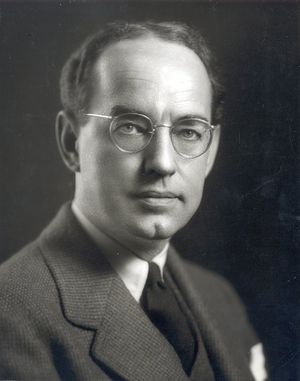 Arthur F. Van Dyck, IRE President, 1942, served as an expert radio aide for the United States Navy, and he was in charge of radio receiver design at General Electric Company.

Arthur F. Van Dyck was born at Stuyvesant Falls, N. Y., May 20, 1891. He graduated from Sheffield Scientific School of Yale University with Ph.D. degree in 1911. From 1907 to 1910 he operated both at sea in the commercial service and on land as an amateur.

After graduation he was engaged in research work at Brant Rock, Mass., for the National Electric Signalling Company until 1912. His next connection was in the Research Department of the Westinghouse Electric and Manufacturing Company at East Pittsburgh, Pa. Leaving there in 1914, he became instructor in electrical engineering at the Carnegie Institute of Technology. In the U.S. Naval Reserve he held the rank of lieutenant Commander. In 1917 he became an Expert Radio Aide for the U. S. Navy and was stationed at the New York Navy Yard and at the Navy Department in Washington until1919, when he joined the Marconi Company at Aldene, N. J., in charge of the engineering department. From 1920 to 1922 he had charge of radio receiver design for the General Electric Company in Schenectady, N. Y. In 1922 he became associated with the Radio Corporation of America, later the Radio-Victor Corporation, as manager of the engineering and test department in 1929. In 1930 he was with RCA in the Patent and License Department.

Retrieved from "https://ethw.org/w/index.php?title=Arthur_F._Van_Dyck&oldid=145299"
Categories:
This page was last edited on 18 January 2016, at 17:44.
About ETHW
Policies and disclaimers