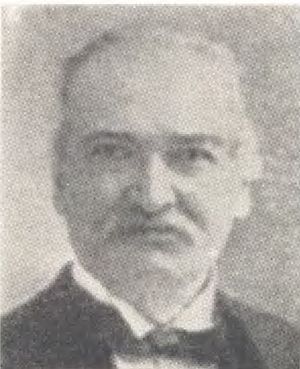 Professor Antonio Pacinotti, original inventor of the d-c dynamo with its commutator, and of the ring and toothed types of armature, was born at Pisa, Italy, 17 June 1841; his death occurred in that city on 24 March 1912, only a few weeks after his election on 12 January 1912, as an Honorary Member of the AIEE. Under the direction of his father he early began the study of electromagnetism, and by the time he was seventeen years of age had the principles of the d-c generator well in mind, constructing in 1860 the celebrated machine which 10 years later was reinvented by Gramme. After three years of experimentation with his models, Professor Pacinotti published an illustrated description of his dynamo in the Nuovo Cimento in 1864, but this received little attention at the time. The machine described by the young Italian embodied for the first time the ring armature with its symmetrically grouped coils closed upon themselves and connected to the bars of a commutator, the brushes of which delivered practically non-fluctuating current. Early in his work, the Italian inventor discovered the reversibility of the dynamo of his creation, having noted that if the machine were supplied with energy from an outside source it would run as a motor. In 1862, he was appointed to the assistant professorship of astronomy at Florence, and, having to renounce carrying out his electrical experiments on the enlarged scale he had planned, then prepared the Nuovo Cimento description of his generator already mentioned. In 1864, he received the professorship of applied physics at Bologna and in 1873 was appointed professor of physics at Cagliara. At the Vienna exposition in 1873, he exhibited his dynamo model made in 1860, and for the first time received wide credit. A medal of progress was granted Professor Pacinotti at Vienna, and other medals of honor were given him in 1881 at Paris. At the time of his death, he was professor of technological physics at the University of Pisa and senator of the Kingdom of Italy.

Retrieved from "https://ethw.org/w/index.php?title=Antonio_Pacinotti&oldid=178329"
Categories:
This page was last edited on 19 February 2020, at 16:29.
About ETHW
Policies and disclaimers