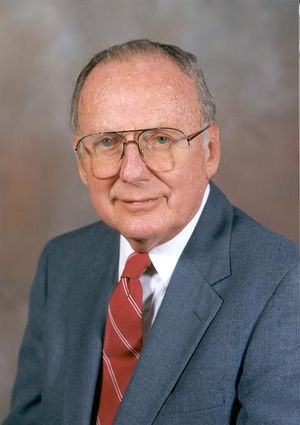 William Richard Tackaberry was born in New York City on November 16, 1917. A graduate of Brooklyn Technical High School, he received the BEE degree from Rensselaer Polytechnic Institute in 1939. That year he began his 41-year career with the General Electric Company as a test engineer. On leave of absence, from 1942 to 1946, he served in the United States Navy as Radar Officer aboard the antiaircraft cruiser USS San Juan.

In 1947, Mr. Tackaberry was transferred to GE's New York Apparatus Sales Office. He held a variety of specialist and managerial assignments relating to the electric utility industry over the next several years.

In 1966, Mr. Tackaberry became headquarters manager of transmission sales, and in 1968 general manager of power transmission and distribution sales. That same year he was elected Vice President, a title he held until his retirement in early 1981. During the intervening 13 years his successive areas of responsibility included the Power Transmission and Distribution Sales Division, Power Systems Field Sales Operations, and Customer and Industry Relations. After retirement he continued to serve GE as a consultant for the next two years.

Mr. Tackaberry was a member of the ASEA-GE Steering Committee and was responsible for terminal converter facilities of the 1440 MW Pacific High Voltage Direct Current Intentie between northern Oregon and southern California. He served as Vice President of the U.S. National Committee of CIGRE (International Conference of Large High Voltage Electric Systems} and a delegate to its international administrative council.

An IEEE Member since 1947, Mr. Tackaberry advanced to Life Senior Member in 1983. Between 1983 and 1987, he served on the Power Engineering Society's Executive Committee. In 1986, he was elected to the IEEE Board of Directors as Division VII-Director-Energy and Power Engineering.

In 1988-89, Mr. Tackaberry served on the IEEE United States Activity Board chairing the Technology Policy Council. He has testified before the Federal Energy Regulatory Commission, and appeared in a segment of the "Good Morning America" TV show dealing with electric and magnetic field health effects. He was a 1991 recipient of the USAB Citation of Honor Award.

Mr. Tackaberry served on Manhattan College School of Engineering's Board of Consultors for seven years. He was a registered Professional Engineer in the State of Pennsylvania.

Residing in Madison, New Jersey, he was married to Patricia Carroll Tackaberry. They had two sons, William and Richard, and four grandchildren. His outside interests included gardening and photography.

Retrieved from "https://ethw.org/w/index.php?title=William_R._Tackaberry&oldid=172961"
Categories:
This page was last edited on 25 January 2019, at 21:34.
About ETHW
Policies and disclaimers