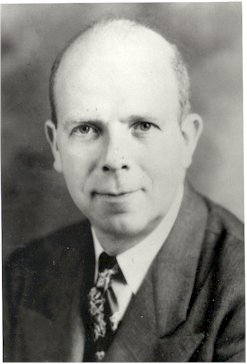 William L. Everitt, IRE President, 1945, served in the department of development and research at the American Telephone and Telegraph Company.

William Litell Everitt was born on 14 April 1900, in Baltimore, Maryland. During World War I he served in the U. S. Marine Corps from 1918 to 1919. At the war's conclusion, he matriculated at Cornell University, where he taught electrical engineering from 1920 until he received the E.E. degree in 1922. In that year, he joined the North Electric Manufacturing Company of Galion, Ohio, as engineer in charge of the design and development of their relay automatic public switchboard exchanges.

He left North Electric Manufacturing in 1924 to teach electrical engineering at the University of Michigan. In 1926 - the year in which he received the M.A. from Michigan-he transferred to Ohio State University to take charge of their communications engineering staff in the capacity of assistant professor.

During the summers from 1925 to 1930, Everitt served with the department of development and research of the American Telephone and Telegraph Company. Joining the Institute of Radio Engineers as an Associate Member in 1925, he became a Member in 1929, and also was elevated to the rank of associate professor at Ohio State in that year. In 1933 he received the Ph.D. degree and was promoted to a full professorship. At Ohio State he originated and directed the annual Broadcast Engineering Conference, in which the IRE participated. He became a Fellow of the IRE in 1938.

In 1940 Everitt was appointed a member of the Communications Section of the National Defense Research Committee. Two years later he took a leave of absence from the University to serve as director of operational research with the U. S. Army Signal Corps.

He was appointed head of the University of Illinois electrical engineering department in absentia 1943, and at the war's conclusion he took up his duties there. He was Dean of the University of Illinois' engineering college from 1949 until 1968. His interest in and accessibility to students was much praised by colleagues. At the time of his retirement, a teaching award was named in his honor. He was the first recipient.

Everitt was the author and editor of numerous texts and articles on electrical engineering, including the widely used Communications Engineering. Everitt consulted for various broadcast stations and radio manufacturing companies. He also invented several devices, including a radio altimeter and automatic telephone equipment. He was President of the IRE in 1945. He received the IRE Medal of Honor in 1954, "For his distinguished career as author, educator and scientist; for his contributions in establishing electronics and communications as a major branch of electrical engineering; for his unselfish service to his country; for his leadership in the affairs of The Institute of Radio Engineers."

Everitt was married to his first wife, Dorothy, for 55 years and with her raised two daughters and a son. Two years after Dorothy’s death in 1978, he married Margaret Anderson Larson. He passed away on 6 September 1986.

Retrieved from "https://ethw.org/w/index.php?title=William_Everitt&oldid=158580"
Categories:
This page was last edited on 15 February 2018, at 14:35.
About ETHW
Policies and disclaimers