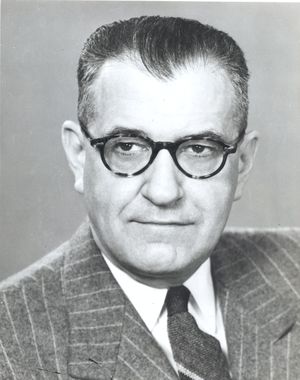 He took a job with General Electric (GE) in 1916 and worked on radio apparatus for military applications during the first World War. As a member of the radio engineering department at GE during the early 1920's, he contributed to the design of radio broadcast transmitters including station WGY in Schenectady. From 1924-1929, he had administrative responsibility for radio products manufactured by GE. In 1929, he was selected to be production manager for a Radio Corporation of America (RCA) manufacturing plant in Camden, New Jersey, but he returned to GE in 1935 as the manager of its radio-television facility in Bridgeport, Connecticut. He was named a GE vice president in 1941.

Baker served as director of the engineering department of the Radio Manufacturers Association (RMA) in the 1930's. The RMA established two television committees to prepare reports on standards and frequency allocation for FCC hearings held in June 1936. Donald G. Fink has described the work of these two committees as being "the first major step in television standardization in the United States." Several of their recommendations-including those for channel width, aspect ratio, and frame rate-survived as part of the NTSC standards adopted in 1941. The 441 line picture recommended by the RMA committee in 1936, however, was changed upward to 525 lines by the NTSC.

In the face of disagreement among RCA and its competitors, including Zenith, Philco, and Dumont, over proposed standards, the FCC in May 1940 announced that it would be prepared to authorize full commercialization of television "as soon as the engineering opinion of the industry is prepared to approve any one of the competing systems of broadcasting as the standard system." After a meeting with the FCC Chairman, James L. Fly, Baker agreed to organize and chair the NTSC in an effort to reach a consensus. Over the next several months, 168 members devoted approximately 4,000 person hours to meetings and compiled approximately 600,000 words of reports and minutes. At its final meeting on March 8, 1941, the NTSC changed its recommendation on the number of lines from 441 to 525. This was a compromise, suggested to Baker by Donald G. Fink, between the 441 lines favored by RCA and 800 lines preferred by Philco. The NTSC standards became the basis for an explosive growth in the industry after WW II, and there were approximately 31 million monochrome television receivers and 416 transmitting stations in the United States by November 1954.

Baker served as president of the Institute of Radio Engineers (IRE) in 1947 and then chaired the second NTSC from January 1950 until its final meeting in July 1953. The FCC adopted this committee's recommended standards for compatible color television and authorized commercial broadcasting under these standards beginning in January 1954. Baker became interested in the educational potential of television and published a paper on the subject in 1954. He contended that the pace of technological change had tended to overwhelm the educational system and that television might be used to facilitate learning because of its visual impact.

The War Department cited Baker for his assistance in the design and production of radio and radar equipment. He also worked with the military during the Korean War. He was awarded the Army Medal of Freedom in 1953.

Baker was president of the Electronic Industries Association, which in 1953 voted him its Medal of Honor. He became an Associate of the IRE in 1919 and a Fellow in 1928. He served on many IRE and technical committees, and he was the chairman of the Professional Groups Committee. He also served as IRE Representative on the ASME- Glossary Review Board from 1948 to 1952.

Baker won the IRE Medal of Honor in 1952, in recognition of "his outstanding direction of scientific and engineering projects; for his statesmanship in reconciling conflicting viewpoints and obtaining cooperative effort; and for his service to the Institute." He was named as an Eminent Member of Eta Kappa Nu in 1954. He received the IRE Founders Award, an award which is given only on special occasions to outstanding leaders in the radio industry, at the banquet of the annual IRE National Convention in March 1958. Baker, the fourth winner of this award, received it "for outstanding contributions to the radio engineering profession through wise and courageous leadership in the planning and administration of technical developments which have greatly increased the impact of electronics on the public welfare." He retired from GE in 1957 and died on October 30th, 1960.