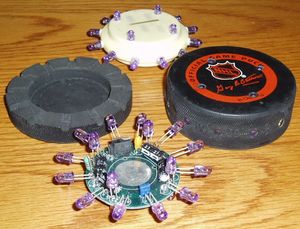 Assembly of digital infrared electronics to make an official NHL game puck. Power source, which would sit in the middle of the electronics, not shown. Courtesy of Rick Cavallaro, Sportvision

Since the first televised sporting event, broadcasters have used new visualization technologies to enhance the viewer’s experience of sporting events. The first notable innovation was the instant replay. Nearly 55 years ago, the Canadian Broadcasting Corporation (CBC) first tested the idea of an instant replay system. However, it was ABC’s well known program Wide World of Sports that first put the technology on the air. The first time instant replay was applied to a football game was in CBS’s broadcast of the 1963 Army-Navy game. In 1997, ESPN introduced another big technological innovation in football broadcasting: the “First-and-Ten Line.” In addition to the white yardage lines on the field, the viewer also sees a simple line that stretches the entire width of the field. Also called the “Yellow Line” because of its color, this line indicates where the offense has to reach to get the next first-down. As a result, the line constantly keeps shifting up and down the field as the game progresses.

The striking feature of this line is that, at every moment, it appears to the viewer as if it were literally painted on the field. Very sophisticated technological innovation, developed by a Silicon Valley based company called Sportvision, was needed to pull off this illusion. Sports fans can be very critical of changes made to their time-honored ways of viewing a sport, but the Yellow Line was well received from the moment it was introduced. In fact, it has become an integral part of the game. For most viewers, it is hard to imagine that there was a time when televised football did not have this line “painted” on the field.

Not all innovations in sports broadcasting have met with the same warm reception as instant replay and the Yellow line, however. In fact, the Yellow Line actually has its roots in an innovation that was every bit as much a technical triumph, but was considered by many an aesthetic failure.

Having just won the broadcast rights to professional ice hockey in 1995, Fox was eager to break out of the traditional television market for the sport, which was small compared to football, baseball and basketball. Most Americans knew little about ice hockey. Fox’s challenge was to make the game understandable and easier to follow. A hockey puck, which is quite small and travels at extremely high speeds, can be almost impossible to follow, even by the most attentive spectators. Experienced fans do not need to follow the puck at every instant because they understand the overall flow of the game and the positioning of players on the ice. David Hill, the head of Fox Sports, believed that if the viewer could easily follow the puck, the game would seem less confusing to newcomers, and hence become more appealing to a broader audience. Hill asked Stan Honey, the Executive VP of Technology for News Corporation, which owned Fox and Fox Sports, if it would be possible to make the puck easy to follow on the television screen. Honey, an electrical engineer, alumnus of SRI International (formerly the Stanford Research Institute), and a member of IEEE, replied it could be done for about $2 million.

Hill pitched the idea to Rupert Murdoch, the CEO and Chairman of News Corporation. Without hesitation, Murdoch agreed to the project. Honey quickly put together a team, including several recruits from SRI International. Rick Cavallaro was the project manager. Jerry Gepner, VP of Production for Fox Sports, also joined the team.

Video above is from the All-Star game where the puck tracking system was first introduced by Fox Sports. The color of the streak indicates speed: red is faster than blue. (Video is courtesy of Fox Sports, a Division of the Fox Broadcasting Company.)

The goal was to make the puck visible by color enhancing it. In the final product, a blue glow was superimposed on the puck as it moved over the ice. When the puck went airborne, the trajectory would be displayed as blue streak. If the puck went over a certain speed, the streak would turn red for dramatic effect. To implement this enhancement required 3-D tracking technology as sophisticated as any advanced military system. New technology was also needed to match the tracking data to the image field produced by the television camera. Special sensors to measure zoom, pan and tilt, were designed and mounted in the cameras. Additional sensors had to be placed throughout the rafters of the hockey arena to guarantee a precise fix in three-space and any instant in time, regardless of the obstacles blocking the puck on the ice. In the greatest technical challenge, the transmitting electronics had to be resistant to shocks, able to be “seen” regardless of the pucks orientation and location in space, have an adequate supply of power, …and be small enough to fit into a puck! There was one more critical constraint. As it moved around the ice, bounced off the boards, and hit by the hockey stick, the new puck had to behave like a standard game puck.

Initially, the Fox team experimented with a microwave- and infrared-based tracking systems. Half way through the project, the team committed to infrared-based approach. To bring all this data together in real-time, a truck load of computational power was needed. Computational performance of the day was pushed to the limits. The already immense technological challenge was made even more difficult by a very tight deadline. Fox had made the decision to have the system ready for the National Hockey League All-Star Game in the late January 1996. The success of the system was never certain even up to the week before the All-Star Game, in fabled Boston Garden. Fox Sports’ marketing machine further ratcheted up pressure on the design team with an over-the-top television advertising campaign promising a “revolutionary” technological breakthrough for the All-Star Game. The tension was palpable as the All-Star festivities started. To everyone’s immense relief, it the system performed well. Despite this marvelous technical achievement, die-hard fans were very critical. Placing a glow over the puck was seen as a sacrilege. A real hockey fan did not need such enhancements, they argued. The game was being ruined in the name of greater market share. As it turned out, the “glowing puck” became one of those things that people love to hate…which turns out to be not all bad. Fox loved the controversy. As callers tied up the switchboards on sports talk shows lambasting Fox, the publicity turned out to be worth far more than the $2 million it cost to develop the system. Ratings, in fact, shot up. Use of the puck-tracking technology was discontinued a few years later, when Fox lost its contract to televise the sport, and the glowing puck was never revived. For the U.S. patent see FoxTrax puck tracking system

Video above is an example of the over-the-top and amusing TV advertising that Fox Sports used to promote the puck tracking innovation. (Video is courtesy of Fox Sports, a Division of the Fox Broadcasting Company.)

Recollections of the development of the FoxTrax hockey puck tracking system

The story of Sportvision broadcasting|Hockey]]

Retrieved from "https://ethw.org/w/index.php?title=Tracking_the_Ice_Hockey_Puck_-_FoxTrax_(Glow_Puck)&oldid=110140"
Categories:
This page was last edited on 6 January 2015, at 21:27.
About ETHW
Policies and disclaimers