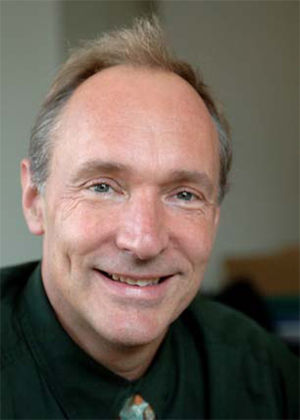 Timothy Berners-Lee developed the foundation for the World Wide Web while working at the European Organization for Particle Research (CERN) in Geneva, Switzerland. There he wrote his first program for storing information, which he named “Enquire.” The program turned out to be the conceptual basis for the future World Wide Web. In 1994, Sir Tim founded the World Wide Web Consortium (W3C), an international organization that creates standards for Web technology. Sir Tim serves as its Director. He became the first holder of the 3Com Founders Chair at MIT Laboratory for Computer Science, which merged with the Artificial Intelligence Lab to become “CSAIL,” the Computer Science and Artificial Intelligence Laboratory. Sir Tim serves as Senior Research Scientist at CSAIL. He is a Chair in the Computer Science Department at the University of Southampton, UK and co-director of the New Web Science Research Initiative, launched in 2006.

Sir Tim is a Distinguished Fellow of the British Computer Society, a Fellow of the Royal Society, and a Foreign Associate of the National Academy of Engineering. He has been knighted by the Queen of England for his contributions to the development of the Internet, was awarded the Order of Merit, and received the Charles Stark Draper Prize. He was named one of the 100 greatest minds of the 20th century by Time Magazine. He holds his bachelors in physics from Oxford University, England and holds nine honorary doctorates.

Retrieved from "https://ethw.org/w/index.php?title=Timothy_Berners-Lee&oldid=147265"
Categories:
This page was last edited on 29 February 2016, at 19:54.
About ETHW
Policies and disclaimers