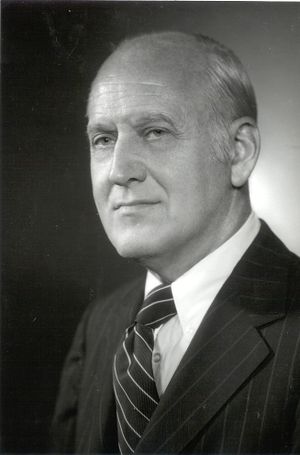 When the Great Blackout of 1965 struck the Northeast portion of the United States, Theodore J. (Ted) Nagel was head of the planning function of the American Electric Power System, with offices in New York City.

However, since foresight is the handmaiden of planning, he was 500 miles away in brightly illuminated Roanoke, Virginia, at that hour. The fact is-and it tends to spoil the story-that it was not foresight, but an AEP management meeting that took him away from Manhattan on that occasion.

Even so, he was allowed no time to enjoy the meeting, pecause the then-Federal Power Commission summoned him immediately to Washington to participate in its inquiry into the blackout, and ultimately to write the report to the President. Later, following a similar though lesser failure in the Pennsylvania-Jersey-Maryland area, Nagel was called upon to repeat his role.

Nagel's reputation as an expert on electric power supply reliability and planning had been solidly established by the time the FPC called him in, and has been enhanced since. He has participated in all three National Power Surveys of the FPC, and was a vice chairman of the Commission's Advisory Committee on Reliability of Bulk Power Supply. The report of the latter, with Ted serving as pricipal editor and author, was issued in 1967 as Volume II of the Commission's report on "Prevention of Power Failures."

A native of Andes, New York, Ted holds a bachelor of arts degree from Columbia College and a master's in electrical engineering from Columbia University School of Engineering. He spent a year as instructor there before joining American Electric Power in 1939, with whom, except for four years in the Navy during the Second World War, he has been associated ever since. He was elected vice president - system planning in 1967, senior vice president in 1974, and senior executive vice president in 1975. The following year, he was named to his present post, senior executive vice president and assistant to the chairman.

A Fellow of IEEE, he is presently chairman of the National Electric Reliability Council's Technical Advisory Committee, and a member of the National Academy of Engineering, the Conference Internationale des Grands Reseaux Electriques a Haute Tension (CIGRE), Tau Beta Kappa and Eta Kappa Nu.

Being a doer as well as a planner, among other things, Ted engineered and executed the excavation of a basement for his home in Ho-Ho-Kus, New Jersey, where only a crawl space had existed before. He is also helping his son restore a 200-year-old farmhouse in Vermont, where his other child, a daughter, also lives. In Vermont he also enjoys cross-country skiing and snowshoeing.

Ted and his wife, Opal, are inveterate travellers. The have visited from time to time most of Western Europe, Yugoslavia, Greece, Crete and Hungary.

Retrieved from "https://ethw.org/w/index.php?title=Theodore_J._Nagel&oldid=171996"
Categories:
This page was last edited on 20 December 2018, at 19:26.
About ETHW
Policies and disclaimers