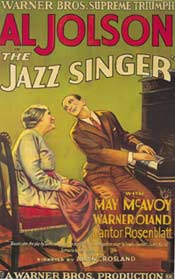 The 1927 Warner Brothers’ movie The Jazz Singer is usually remembered as the first talkie; that is the first feature film that used audio. Although it was not actually the first motion picture with synchronized sound, it did represent a landmark in the history of film.

Following on the heels of numerous previous attempts to link sound and motion pictures, Western Electric demonstrated its sound-on-disc system in 1922. In 1925, Western Electric employee Nathan Levinson saw a demonstration of the system in New York and convinced motion picture producer Samuel Warner to give it a try. The first feature-length film produced by the Warner studio with the new equipment was the 1926 film Don Juan, which featured music and synchronized sound effects but no speech. The second feature film that used this new equipment was The Jazz Singer, which opened in October 1927. It, too, was mostly a silent film set to music, and even had the traditional “title cards” to indicate the dialog of the actors, but some of the music included vocal parts. At one point lead actor Al Jolson looked into the camera and spoke lines that included the famous words, “Wait a minute! Wait a minute! You ain't heard nothin’ yet. Wait a minute, I tell ya, you ain't heard nothin’!” The era of the talkies was launched.

Alfred A. Cohn's screenplay was an adaptation of a live Broadway production written by Samson Raphaelson, called The Day of Atonement. The plot follows the struggles of the son of a Jewish cantor, who yearns to sing popular songs at the local saloon, but who is pressured by his father to follow in his footsteps. The film in its entirety lasted 89 minutes.

The commercial success of The Jazz Singer, was due largely to the spectacle of Al Jolson’s spoken lines. This triumph encouraged other motion picture producers to experiment with synchronized sound. It was so alluring that the very next year, in 1928, Warner exhibited his first film where all of the spoken lines were recorded rather than flashed on the screen on title cards.

Retrieved from "https://ethw.org/w/index.php?title=The_Jazz_Singer&oldid=155855"
Categories:
This page was last edited on 7 August 2017, at 11:12.
About ETHW
Policies and disclaimers