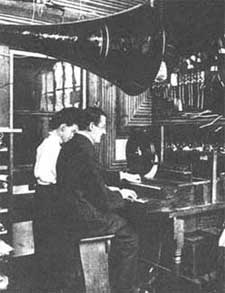 A duo at the Washington Telharmonium keyboard from the magazine World's Work, June 1906.

“Telharmonium” was the strange-sounding name given to one of the earliest electrical musical instruments by its inventor, whose Thaddeus Cahill. The Iowa-born Cahill was a lawyer and sometime inventor, born in 1867. As a youth he enjoyed experimenting with telephones and other gadgets.

By the 1890s, Cahill was fascinated by the prospect of creating a new kind of musical instrument, one that would surpass what he saw as the limitations of all existing types, such as the limited range of notes they could play. In the early 1890s he developed the idea of using small alternating-current generators to generate electric waves at various frequencies. These would be controlled by a keyboard and heard through a telephone receiver. The final design, patented in 1897, had twelve separate generators, which produced the twelve basic tones of the musical scale. Each of these generators (called dynamos in those days) consisted of a motor-driven shaft, packed with a series of “rheotomes” or notched discs. The discs interacted with wire “field” coils to generate an alternating current (by the process of induction). The number of notches in the disc determined the frequency of the current. By operating each dynamo at a precise speed, each disc would produce a current that could be heard as a sound in a telephone receiver. The different tones could be switched on and off in any combination through a piano-like keyboard.

By 1901, Cahill had constructed a working model, and he began seeking financial backing to create a finished machine. With it, he said, he would provide musical concerts that would be delivered over telephone wires to restaurants, bar rooms, or people’s homes. The final model, which employed 145 separate electric generators, was completed in 1906. Weighing in at 200 tons, the giant instrument was 60 feet long, had multiple keyboards and controls, and required at least two players. Cahill made two more Telharmoniums, finishing the last of them in 1911. The last Telharmonium, an even larger system, was installed in a special performance room in New York City from which Cahill and his investors planned to offer Telharmonium music concerts to hotels in the area for a fee. Unfortunately, the instrument interfered with telephone service in the area, aggravating local residents. It was played periodically through about the time of World War I, when it was finally dismantled. No recordings of Telharmonium music are known to exist, and no Telharmonium survived after about 1920.

Retrieved from "https://ethw.org/w/index.php?title=Telharmonium&oldid=154666"
Categories:
This page was last edited on 12 April 2017, at 13:51.
About ETHW
Policies and disclaimers