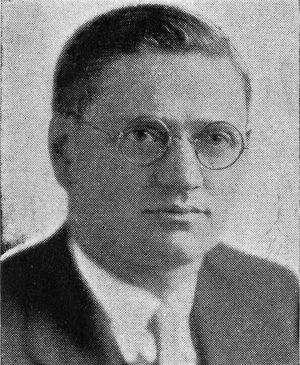 Stanley Stokes (AIEE Α'16, M'21, F'29), consulting electrical engineer for the Union Electric Light & Power Company, St. Louis, Mo., was made a vice-president of the AIEE representing the South West District (No. 7) by action of the Institute's board of directors, October 12, 1932. Mr. Stokes was appointed to serve until July 31, 1934, filling the unexpired term of G. A. Mills, formerly of Dallas, Texas, but recently removed to Lansing, Mich.

Mr. Stokes was born in Columbia, Mo., February 19, 1890; started to school in Cambridge, Mass., while his father was doing graduate work at Harvard University. Continuing through the customary grade schools, he subsequently went to Kirksville (Mo.) State Teachers' College, then attended and subsequently (1912) graduated from the University of Missouri, with the degree of Electrical Engineer representing an additional year's work. In 1910 and 1911 during summer vacations he was with the Telluride Power Company, Utah, on telephone reconstruction work. During this period he received through the Telluride Association a scholarship at Cornell University of which he was unable to take advantage because of financial reasons.

During the academic year 1911-12 he was student assistant in physics at the University of Missouri. Mr. Stokes has been associated continuously with the following companies: 1912-14 with the Mississippi River Power Distributing Company as material clerk, estimator, and handling sundry other details incident to substation construction in connection with the Keokuk development; 1914-15, with the Electric Company of Missouri on cost analysis, rate schedule, and other such work, acting as assistant to the vice-president; 1915-16, sales engineer for the Electric Company of Missouri; 1916-18, superintendent of the Jefferson (Mo.) division of the Union Electric Light and Power Company in charge of transmission and distribution construction, and the conversion and interconnection of small local plants; 1918-25, manager of the outlying plant division of this company, serving also during this interval as vice-president and general manager of the Commercial Telephone Company operating in Franklin County, Mo. ; 1925-29, assistant vice-president in charge of electrical engineering and power supervision, in charge of construction of major transmission lines, and responsible to a large degree for important work in connection with the further development of the Keokuk hydroelectric plant and the complete layout of the Cahokia steam-electric generating plant, as well as the interconnection of these plants.

Mr. Stokes' activities have included participation in the affairs of the AIEE St. Louis Section, for which he has served as secretary and also as chairman of the program committee. His technical writings include "Hinged Wooden Arms Used on Osage-Rivermines Line," published in Electrical Engineering in February 1932.

Retrieved from "https://ethw.org/w/index.php?title=Stanley_Stokes&oldid=178832"
Categories:
This page was last edited on 6 March 2020, at 16:11.
About ETHW
Policies and disclaimers