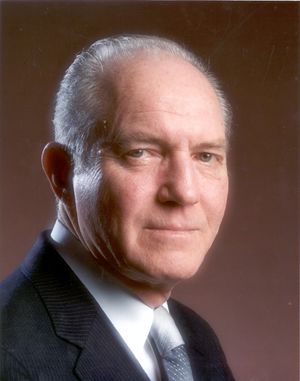 He entered the Army Air Corps in 1942 and served as a fighter pilot in Europe during WWII. He served with the US Air Force until he retired with the rank of General in 1975. While with the Air Force, he served in numerous challenging assignments involving development and application of advanced technology.

From 1959 to 1963 he was Director of the Minuteman ICBM Program. Developing technology for application in the missile and its underground network of bases required establishing procedures for systems engineering and management that were unprecedented at the time. In 1963, General Phillips was assigned to the National Aeronautics and Space Administration where he served as Director of the Apollo Program until men successfully landed on the moon in 1969. Later, he was Commander, Air Force Space and Missile Systems Organization; Director, National Security Agency; and Commander, Air Force Systems Command.

Honors presented to General Phillips include the Langley Medal of the Smithsonian Institution, the General Thomas D. White USAF Space Trophy, the Astronautics Engineer Award of the National Space Club, and Distinguished Service Medals from both the USAF and NASA. He was a member of the National Academy of Engineering and a Fellow of the Institute of Electrical and Electronics Engineers, the American Institute of Aeronautics and Astronautics, and the American Astronautical Society.

He was a member of the corporation of the Charles Stark Draper Laboratory and served on the Los Angeles Council of the Boy Scouts of America. He and his wife, Betty Anne, resided in Palos Verdes Estates, California. They have three daughters and four grandchildren.

Retrieved from "https://ethw.org/w/index.php?title=Samuel_C._Phillips&oldid=172817"
Categories:
This page was last edited on 22 January 2019, at 19:57.
About ETHW
Policies and disclaimers