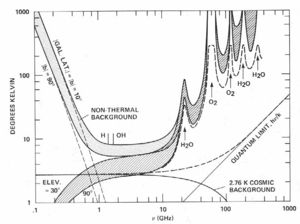 For more than 40 years, astronomers have used microwave radio telescopes to try to detect signals from extraterrestrial aliens. Both Guglielmo Marconi and Nikola Tesla at one time claimed they had detected radio signals from aliens, but it was not until 1959 that a thorough search began. In that year, Cornell University astronomers Phillip Morrison and Giuseppi Cocconi proposed using large radio telescopes to try to receive these messages, if they in fact exist. They claimed that any intelligent civilization would probably broadcast at a frequency of 1420MHz, wavelength of 21 centimeters, because this is the emission resonance frequency of hydrogen, the most common atom in the universe.

The search, which has come to be known as the Search for Extraterrestrial Intelligence or SETI, has been controversial from start. There was no evidence of the existence of intelligent, technologically advanced, radio-using aliens in 1959, and there is still none today. The use of expensive radio telescopes for this purpose makes it difficult for astronomers to use them for more conventional observations. For that reason, several SETI projects were undertaken over the years where the sky was monitored for 500 hours or less. The major exceptions were an antenna at Ohio State University that was used continuously for this purpose from 1973 to 1998 and a NASA-funded project that began in 1979 and continued through 1993. However, after spending $23 million on the project, its funding was cancelled by congress in the early 1990s due to lack of findings.

An accidental finding was the discovery of pulsars, thought originally to be generated by ET signals. The actual pulsar discovery apparently was not linked to a SETI search... [[needs more info..]

The search continues today as a smaller, privately funded project, and over the years public awareness of SETI has grown. Its profile was raised considerably following the release of Carl Sagan's book 'Contact' and its subsequent film adaptation, which featured fictionalized SETI scientists at work at the Arecibo, Puerto Rico radio telescope facility and the Very Large Array radio telescope complex in New Mexico, both of which have actually been used for SETI research in the past.

The SETI Institute was established in the early 1960's as a coordinated group to promote SETI observations.

A strong 'amateur SETI' movment exists, mainly among amater radio operators who have equipment that operates around the 1300MHz to 1420Mhz part of the radio spectrum.

Retrieved from "https://ethw.org/w/index.php?title=SETI&oldid=120303"
Categories:
This page was last edited on 28 September 2015, at 19:12.
About ETHW
Policies and disclaimers