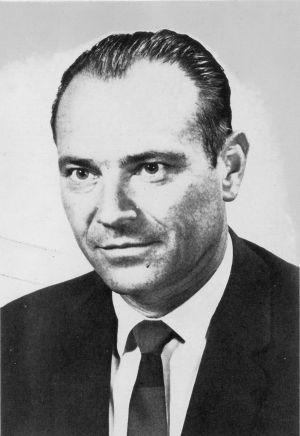 Dr. Rudolf A. Stampfl is a native of Austria. He was granted his B.E.E., M.S., and Ph.D. degrees in Electronics and Communications from the Institute of Technology in Vienna.

Dr. Stampfl came to the United States in 1953. He joined the U. S. Army Research and Development Laboratories, Fort Monmouth, N. J., where he helped develop acoustic and seismic surveillance and sound-ranging systems. In 1956 he was one of the senior members of the team that designed, built and launched the Vanguard II cloud-cover satellite. Concurrently, he built the recording subsystems for the world's first communication satellite (Project Score) from which President Eisenhower broadcast his Christmas message to the world in 1958. In 1959, he joined the Goddard Space Flight Center, of the newly-established National Aeronautics and Space Administration, at Greenbelt, Maryland.

Dr. Stampfl was one of the pioneering leaders of the TIROS series of meteorological satellites. He developed the infrared subsystem, was Operations Manager for TIROS I, and led the TIROS II Government RCA team as its Project Manager to the successful spacecraft launch in November 1960.

In the subsequent years, he designed the majority of the spacecraft systems for the Nimbus weather satellite and during the early development phases served as the project's spacecraft manager. He also devised the Automatic Picture Transmission camera. It is used for Nimbus and Tiros, and also used operationally by the Environmental Science Service Administration's satellites.

In 1962, he was appointed to head the newly founded Instrumentation Branch of the Goddard Space Flight Center which was charged with the development of advanced instrumentation and data systems for meteorological satellites. This team produced the data processing systems for the Nimbus Project, including unique data displays and a data collection system (IRLS) planned for later flights.

During the academic year 1964-1965, Dr. Stampfl accepted an invitation from the University of California in Los Angeles, California, to serve as a visiting lecturer where he taught a graduate seminar on space instrumentation systems and conducted research on optical communication.

Dr. Stampfl headed the Goddard Systems Division which supports major space flight missions, including such scientific satellites such as the Orbiting Geophysical Observatory (OGO), Orbiting Astronomical Observatory (OAO) , Meteorological and Applications Technology Satellites, as well as advanced system planning and development for communication, navigation, meteorological satellites and scientific observations. Dr. Stampfl is the author of numerous papers on aerospace systems and instrumentation and holds many patents. He has also received U. S. Army and NASA awards for his contributions to Project Score (Army) and the TIROS weather satellite program (NASA). He is a Senior Member of the IEEE.

When the opportunity presents itself Dr. Stampfl loved to hike and climb mountains, whether they be the Appalachians or the Sierras. He was an ardent skier and in summer he enjoys swimming and waterskiing. His enthusiasm for the outdoors is shared by his wife, Ursula, and young children, Susanne and Peter, who accompany Dr. Stampfl whenever possible.

Retrieved from "https://ethw.org/w/index.php?title=Rudolf_A._Stampfl&oldid=172136"
Categories:
This page was last edited on 21 December 2018, at 21:12.
About ETHW
Policies and disclaimers