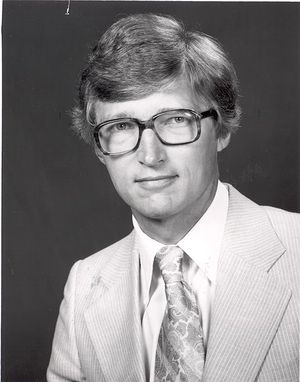 Robert D. (Bob) Cutkosky was born in Minneapolis, Minnesota, in 1933. He received the B.S. degree in physics from the Massachusetts Institute of Technology in 1955. He has been employed ever since by the National Bureau of Standards, Washington, D.C., first in the Electricity Division, and more recently in the Center for Absolute Physical Quantities.

His first research activity at NBS involved measuring the Ampere with the aid of a current balance, This work was performed under the direction of Mr. Raymond Driscoll, who taught him many of the skills that were to prove valuable in his later work. After the conclusion of the Ampere determination and after a brief period in which he helped construct equipment for a measurement of the proton gyromagnetic ratio, he joined a new group which was formed to upgrade the accuracies of audio frequency impedance measurements at NBS. This work closely followed the pioneering efforts of A. M. Thompson and others of the National Measurement Laboratory in Sydney, Australia. Within a few years, he had completed a ±2 parts per million measurement of the Ohm utilizing a cross capacitor and a quadrature bridge, and was on his way to Australia with his wife, Mary, and son, Dale, to study the new developments of Mel Thompson and Keith Clothier.

Following this visit, his efforts were devoted to the reconstruction of the NBS cross capacitor and its associated equipment, with the aim of achieving an overall uncertainty of a' few parts in 108 in the measurement of the Ohm. The "associated equipment" developed specifically for this work included fused silica dielectric capacitors, four terminal pair admittance standards, and a variety of re~istance thermometer bridges. Since completing the absolute Ohm and Farad work in 1974, Bob has directed his research efforts towards the application of minicomputers and especially microprocessors to self balancing, high accuracy, impedance bridges.

Bob has published some 20 technical papers and has received considerable recognition for his work, In 1961 he received a U.S. Department of Commerce Silver Medal Award; in 1962 he was cited as the Outstanding Young Scientist of the DC Council of Engineering and Architectural Societies; in 1967 he received the Washington Academy of Sciences Award for Achievement in Engineering; and in 1974 he was elected a Fellow of the IEEE.

Bob and his family became interested in sailing, and have raced a variety of small boats, mostly on the Chesapeake Bay. Bob served on race committees from time to time, and was once the "measurer" for a 505 regatta.

Retrieved from "https://ethw.org/w/index.php?title=Robert_D._Cutkosky&oldid=172614"
Categories:
This page was last edited on 18 January 2019, at 15:10.
About ETHW
Policies and disclaimers