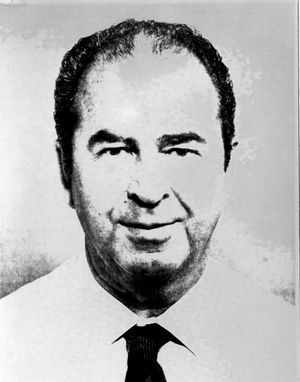 Arthur Melville Thompson was born in Adelaide, South Australia, on 4 January 1917. He graduated from the University of Adelaide in 1938 with the degree of Bachelor of Science with 1st class honours in Physics.

Mel Thompson's association with the National Measurement Laboratory started in 1940 when, as one of the first members of the staff of the Laboratory (known then as the National Standards Laboratory), he went to the National Physical Laboratory in Britain to work with G. H. Rayner. He returned to Australia in 1941 via North America, visiting the US National Bureau of Standards and the Canadian National Research Council. Along with other members of the staff of the Laboratory, he immediately became involved in work relating to wartime problems and rapidly became an expert on the degaussing of ships. At the end of the war he turned his full attention to the development of methods for the precise measurement of electric quantities and in particular the measurement of capacitance. Over a number of years he developed elegant techniques for the measurement of very small capacitances and from this work grew a special interest in the possibility of the development of a capacitor the value of which could be related directly to the standard of length. Collaboration with D. G. Lampard and W. K. Clothier led to the construction of a cylindrical cross-capacitor which made it possible to realize the farad and later the ohm with an uncertainty of less than 1 in 106.

Mel Thompson had an increasing load of administration and on several occasions has served as Acting Director of NML. In spite of this, he has continued to be actively involved in research relating to precise electric measurements and has recently shed some of his administrative load so as to be able to devote more time to research work. In 1967 he was awarded the honorary degree of Doktor-Ingenieur by the Technical University of Hannover and in 1972 he became a Fellow of the Australian Academy of Science. He is also a Fellow of the Australian Institute of Physics.

The National Measurement Laboratory moved from its original site in the grounds of the University of Sydney to new buildings at Lindfield, some 10 kilometres northwest of Sydney. During the planning stage Mel Thompson was Chairman of a committee set up to collaborate with the architects responsible for the design. In this capacity he made major contributions to the general design philosophy and he has also been heavily involved in the past few months in getting the Laboratory settled and working in its new location.

In spite of being based in Australia, Mel was well known in electric measurement laboratories around the world. On several occasions since 1941, he has visited North America and Europe, his most recent visit being in 1974.

Mel was reticent about his hobbies and the available evidence suggested that the principal one is reading technical journals.