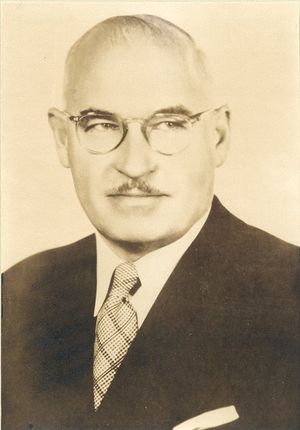 Raymond F. Guy (IRE Associate, 1925; Member, 1931; and Fellow, 1939) was born in Hartford, Connecticut on 4 July 1899. He was a radio amateur from 1911 until 1916 when he joined the professional ranks as a ship's radio officer and radio inspector. He was employed at intervals by the Marconi Wireless Telegraph Co., the Independent Wireless Telegraph Co., and the Shipowners Radio Service. During the concluding engagements of World War I, he served in France in the Signal Corps of the Regular Army of the United States. After being discharged, he entered Pratt Institute, graduating with the electrical engineering degree in 1921.

The year 1951, marked Guy's thirtieth consecutive year as a broadcast engineer. He became a member of the staff of WJZ when, in 1921, it began operations as the world's second licensed broadcasting station. In 1924 he became, a member of the engineering staff of the RCA Research Laboratories, supervising engineering, development, and construction of standard and short-wave broadcasting apparatus, stations, and systems, and participating in RCA's earliest television development.

In 1929, Guy transferred to the National Broadcasting Company to direct its frequency allocations engineering, and the planning, design, and construction of all NBC transmitting facilities. His activities have included all technical and allied phases of the industry during the entire growth period-of AM, FM, short-wave, and television broadcasting. During World War II, Mr. Guy participated in projects of the ass, the CIAA, and the OWL Since then he has taken part in International Conferences on radio in Havanna, Mexico City, Montreal, and Washington.

Guy, a Manager of Radio and Allocations Engineering for the National Broadcasting Company, became an IRE Associate Member in 1925; a Member in 1931; and a Fellow in 1939. In 1943, he was elected to the Board of Directors and served through 1948, including one term as treasurer. Guy served as Chair of the Standards, Public Relations, Fountlers, Transmitters, Membership, and Office Practices Committees, and Vice-Chairman of the Building Fund and Executive Committees. He also served on Several Panels and Committees of the Radio Technical Planning Board and represented the IRE in the activities of the American Standards Association.