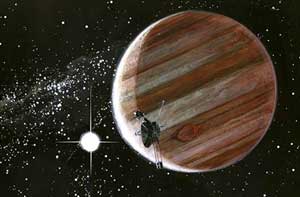 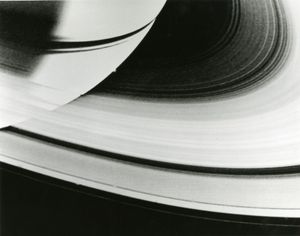 For three decades, Pioneers 10 and 11 traveled through space, achieving a series of firsts in space exploration. Launched in 1972, Pioneer 10 became the first man-made object to pass through the asteroid belt between Mars and Jupiter, to fly by Jupiter, and to subsequently leave the solar system. Pioneer 11, launched the next year, followed Pioneer 10 past Jupiter and became the first space probe to observe Saturn. Both spacecraft carried plaques depicting male and female representatives of the human race and provided information about our location in the solar system.

Pioneer 10 was not the first space probe to capture and return images from space, but the technology it used to do so was typical of such missions. The famous images of Jupiter that the craft sent to earth were taken with a special device called an imaging photopolarimeter. Along with special electronic circuits, this device collected incoming light from the planet, digitized it, and sent it by microwave radio transmission back to earth at a speed of about 1024 bits per second. This is on the slow side, but the slow speed helps ensure few errors. Because Pioneer was designed to spin as it flew, it captured an image of the planet in small bits that were transmitted and reassembled into a complete picture back on earth.

Pioneer’s transmitter operated at a frequency of 2.5 GHz, close to that of a microwave oven. With an output power of only 8 Watts however, this transmitter consumed much less power than a microwave, and only slightly more than the electric clock on the nightstand. In fact, the power system of the entire satellite could just about light up a 150 Watt incandescent bulb.

The Pioneers were nuclear-powered because sunlight is too weak beyond Jupiter to have provided energy with solar arrays. By 1995, Pioneer 11’s nuclear power source was nearly spent; with the probe unable to collect or transmit data, NASA ended the Pioneer 11 mission. Pioneer 10, however, continued to astonish scientists by transmitting and receiving communications some 7.5 billion miles away. Although NASA formally decommissioned the spacecraft in 1997, scientists sent greetings to Pioneer 10 on its 30th birthday, 2 March 2002. After a little more than 22 hours, the time it took for the signal to travel out and return at the speed of light, Pioneer 10 answered back. Pioneer 10 is heading toward the constellation Taurus, but won’t reach Aldebaran, the nearest star there, for 2 million years. In January of 2003, NASA received what became the last, faint signal from Pioneer 10; they officially ended the project the following month.

Pioneers 10 and 11 served as pathfinders for the Voyager 1 and 2 spacecrafts, which were launched 16 days apart in 1973. Along with instrumentation for scientific measurements, each probe carried a phonograph disc containing sounds and images representing human experience and achievement. The original Voyager mission was a five-year exploration of Jupiter and Saturn, Saturn’s rings, and the larger moons of the two planets. The mission was expanded to include flybys of Uranus and Neptune. Voyager discoveries include the fast winds of Neptune, kinks in Saturn’s rings, and volcanoes on Jupiter’s moon, Io. The Voyager mission was timed to take advantage of a planetary configuration that occurs about once every 175 years and allows a spacecraft to fly by Jupiter, Saturn, Uranus, and Neptune without requiring large propulsion systems.

After 25 years in space, the probes are still going strong, studying the heliopause—the boundary between the solar wind and interstellar gas. Voyager 1 is now the most distant man-made object in the universe, nearly 8 billion miles from Earth, while Voyager 2 is about 6 billion miles away.

Retrieved from "https://ethw.org/w/index.php?title=Pioneer_and_Voyager_Missions&oldid=160023"
Categories:
This page was last edited on 5 July 2018, at 14:41.
About ETHW
Policies and disclaimers