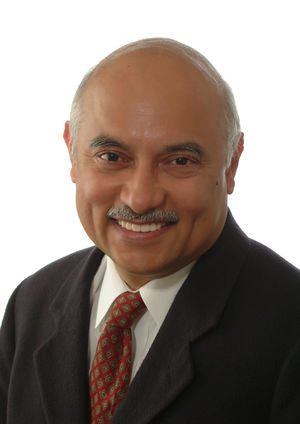 Dr. P.R. Kumar, Franklin W. Woeltge Professor of Electrical and Computer Engineering at the University of Illinois at Urbana-Champaign, has made groundbreaking contributions that have helped to shape industrial practice and research in both semiconductor manufacturing and wireless networking.

In his early work, Dr. Kumar developed self-optimizing controllers for systems modeled as Markov chains, which are commonly used as models in engineering and industrial applications. He also analyzed controllers proposed for linear stochastic systems, and established that under certain conditions the estimated parameters would converge and self-tune to an optimal controller.

In the 1980s, he began studying manufacturing systems and advocated a dynamic systems viewpoint to address the problem of scheduling large manufacturing systems. His approach emphasized stability to guarantee that production would stay apace with demand. This led to his development of distributed real-time scheduling policies for complex semiconductor wafer fabricating plants. These policies, designed to reduce mean queuing time and cycle time standard deviation, have since been implemented in industry. His work also led to a wave of interest in the field of queuing networks, focused on studying their stability and performance properties and their control.

In the late 1990s, Dr. Kumar turned to the then emerging field of wireless networking and addressed the fundamental issue of how much traffic such networks could carry and what should be the architecture of their organization. He established a square-root scaling law governing the limit to information transfer in wireless networks, a work that led to a major reassessment of their capabilities. He also developed a network information theory applicable to any wireless network with an arbitrary number of nodes. He further studied the design of protocols for power control, routing and medium access control, and the problem of cross-layer design for wireless networks.

He has a bachelor of technology degree in electrical engineering from the Indian Institute of Technology in Madras, and master’s and doctoral degrees in systems science and mathematics from Washington University in St. Louis, Missouri.

An IEEE Fellow, he has received the Donald P. Eckman Award of the American Automatic Control Council.