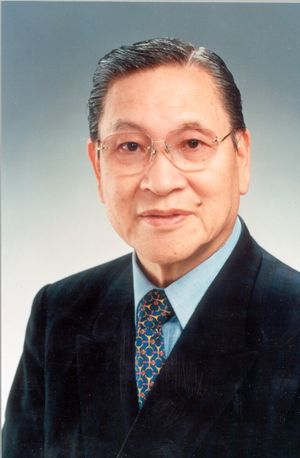 Norio Ohga was born in Numazu City, Japan on January 29, 1930. He earned a B.A. from the Tokyo National University of Fine Arts and Music in 1953. He attended the Hochschule fur Musik in Munich and graduated from the Berlin University of the Arts. Prior to joining Sony, Mr. Ohga pursued a distinguished singing career.

With an unfailing devotion to top quality design, music and technology, Norio Ohga has played a major role in the development and popularization of the compact cassette tape, the compact disc, and now, MiniDisc technology.

As President, Chairman and CEO of Sony Corporation, Mr. Ohga pioneered the concept of the MiniDisc and elaborated a set of detailed specifications for its product development. This inaugurated an entirely new area of business for the recording media industry.

Mr. Ohga joined Sony in 1959 as General Manager of the Tape Recorder Division. There he led the development of automatic gain control, which made tape recorders accessible to the masses. Mr. Ohga played a key role in popularizing the compact cassette tape, and helped usher in the digital audio era with the development and launch of the compact disc in 1982 and the MiniDisc in 1992. The introduction of the CD and MD formats contributed greatly to the expansion of Sony's leadership in the audio industry. He holds several patents for his work.

As Senior Managing Director of CBS/Sony Records, Mr. Ohga helped to create Japan's largest record company. As President of Sony Corporation, Norio Ohga has overseen the company's growth into a total entertainment company, with the purchase of major assets like CBS Records and Columbia Pictures. As Chairman and CEO, he has guided the company through a smooth transition into the digital era.

Mr. Ohga has received many honors including the Medal of Honor with Blue Ribbon from His Majesty the Emperor of Japan, Officier dans l'Ordre National de la Legion d'Honneur from the President of the French Republic, an honorary Doctorate in Music from the University of Rochester, and an honorary Doctor of Music degree from McGill University in Montreal. He is an honorary member of the Audio Engineering Society.

Retrieved from "https://ethw.org/w/index.php?title=Norio_Ohga&oldid=173253"
Categories:
This page was last edited on 1 February 2019, at 18:49.
About ETHW
Policies and disclaimers