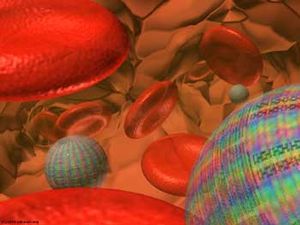 Future nanorobots like the “respirocytes” shown in here may flow in the bloodstream, repairing cells, or delivering oxygen or other molecules to the body. Copyright Vik Olliver, vik@diamondage.co.nz; designed by Robert Freitas.

The first generation of nanomedical devices will probably be similar to microchips, equipped with wireless transmitters and with one or more sensors or probes attached. It is these probes that will probably constitute the nanotechnological aspects of the system, as these will consist of specially engineered molecules. These systems will be implanted in the body (in the liver, brain, or heart, for example), and will monitor living tissues to detect a variety of ailments, such as chemical imbalances or an irregular heartbeat. Some, like Dr. Robert Freitas of the Foresight Institute, have suggested that artificial red blood cells called “respirocytes” could be engineered that would take over the functions of natural red cells. This technology could, he says, be used to produce an artificial blood for use during a transfusion.

Eventually, engineers believe that they will be able to design molecule-size nanorobots that will deliver drugs and repair tissues in the body. Today, for example, there are some drugs that are very effective against certain diseases like cancer, but they are so poisonous to the rest of the body that they either can not be used at all or they cause very serious side effects. Engineers believe that they can design tiny capsules to hold small amounts of drugs, and then inject the capsules into the blood or directly into the diseased part of the body. Then, molecules or sensors attached to the outside of the capsules will locate cancer cells, viruses, bacteria, or even healthy tissue. After latching onto the surface of the cell or virus, tiny pumps will inject drugs at a regulated rate into the cells. Alternately, researchers such as James Baker at the University of Michigan are using treelike molecules called dendrimers to do much the same thing.

Somewhat farther in the future, engineers expect to be able to greatly improve the repair of organs, nerves, and muscles. Today, for example, it is beginning to be possible to use the body’s own repair capabilities to replace certain kinds of damaged or diseased tissues. By growing cells on a synthetic sponge-like material called a “scaffold,” specially designed at the nano-scale to mimic the body’s own tissue structure, it may become possible to regenerate entire organs or reconnect severed nerves.

Many of the hoped-for advances in nanomedicine depend on new ways of constructing microscopic molecules, machines, and computers, but engineers are just beginning to figure it all out. It will be years, if not decades, before we find out if these revolutionary proposals for medicines and therapies will come to pass.

Retrieved from "https://ethw.org/w/index.php?title=Nanomedicine&oldid=154734"
Categories:
This page was last edited on 12 April 2017, at 13:52.
About ETHW
Policies and disclaimers