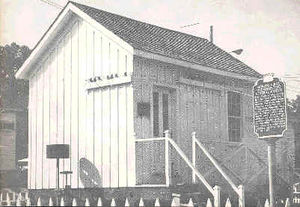 Near this site on September 30, 1882, the world's first hydroelectric central station began operation. The station, here reproduced, was known as the Vulcan Street Plant and had a direct current generator capable of lighting 250 sixteen candle power lamps each equivalent to 50 watts. The generator operated at 110 volts and was driven through gears and belts by a water wheel operating under a ten foot fall of water.

The plaque can be viewed in the Vulcan Heritage Waterfront Park, on W. Water St. in Appleton Wisconsin.

When the Vulcan Street plant began operation in November 1882, it was the first Edison hydroelectric central station to serve a system of private and commercial customers in North America. Prior to this plant, the Edison system of producing light from water-powered generators had only been demonstrated in exhibitions, and its application to commercial service had never been tested.

H.J. Rogers, president of the Appleton Paper and Pulp Co. and of the Appleton Gas Light Co., initially heard of Edison's plant for his first central station from his friend H.E. Jacobs. Jacobs, a representative of the Western Edison Light Co. of Chicago, described Edison's steam-driven Pearl Street Station in New York City, and Rogers began to envision a water-powered plant along the Fox River in Appleton. Enthusiastically, he convinced A.L. Smith, H.D. Smith, a blast furnace owner; and Charles Beveridge, a banker, to join with him to form the Appleton Edison Light Co.

Two Edison "K" type dynamos were ordered and the first generator was installed as an isolated plant in the beater room of the Appleton paper mill. Rogers' new home, the Appleton paper mill, and the Vulcan paper mill were wired, and each was directly connected to the generator. Few details of the venture were published at the time, and both the public and Rogers' sponsors were skeptical about the chances of success. This was aggravated by a false start on 27 September 1882, when the dynamo was started-up but failed to light the lamps. Edward Ames, who had installed the generator, was summoned to correct the problem. On 30 September, they tried again. As the dynamo gained speed, the carbonized bamboo filaments slowly changed from a dull glow to incandescence. The "miracle of the age" had been performed, and the newspapers reported that the illumination was "as bright as day.

Early operators of Rogers isolated plant encountered many problems and promptly conquered them with much ingenuity. Because of the varying load on the paper mill water beaters, the first generator ran irregularly, causing lights to grow inconsistently dim or bright. The condition was remedied by moving the dynamo to a lean-to off the main office, where it was attached to a separate water wheel. Since there were no voltage regulators, operators used their eyes to gauge the proper brightness for the lamps. Because there was little protection from surges, when storms or falling branches caused short circuits, the plant shut down until the trouble was discovered and corrected. And since there were no meters, customers were charged a fiat monthly fee per lamp. In 1882, service was from dusk to dawn, and customers often left their lamps burning all night.

Distribution lines were a bare copper wire. Early house wiring, having a little more protection, was covered with a light insulation of cotton. Wires were fastened to walls with wooden cleats, and tape was wound around wires when they passed through partitions. Early fuse blocks were of wood, and wood was extensively used for sockets and switch handles. Examples of all this equipment may still be found in operable condition in Rogers' home. This building was the first residence in the world to be lighted by electricity from an isolated hydroelectric station.

The second "K" dynamo was placed in its own building along Vulcan Street. This first central station began lighting the homes of A.L. and H.D. Smith on 25 November 1882. Meanwhile, the dynamo in Rogers' mill continued in operation and, by December, five or six mills, a blast furnace, and three or more homes were lighted by the Edison bulbs. Early the next year the Waverly House was wired, becoming the first hotel in the West with electric light. Progress from that point was rapid. In 1886, two larger generators were purchased and placed in a new central plant, and the original model "K" dynamos were also moved to this location, giving Appleton its first three-wire distribution system.

The Vulcan Street plant was the precursor of many projects to, follow, in which civil, mechanical, and electrical engineers cooperated to provide hydroelectric power for the United States.