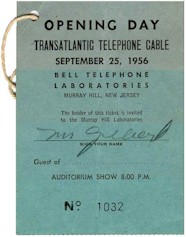 Global telephone communications using submarine cables began here on 25 September 1956, when the first transatlantic undersea telephone system, TAT-1, went into service. This site is the eastern terminal of the transatlantic cable that stretched west to Clarenville, Newfoundland. TAT-1 was a great technological achievement providing unparalleled reliability with fragile components in hostile environments. It was made possible through the efforts of engineers at AT&T Bell Laboratories and BPO. The system operated until 1978.

This site is the western terminal of the first transatlantic telephone cable system, TAT-1, that stretched east to Oban, Scotland. Westward, it ran from here to Sydney Mines, Nova Scotia. Service began on 25 September 1956. TAT-1 was a great technological achievement providing unparalleled reliability with fragile components in hostile environments. It was made possible through the efforts of engineers at AT&T Bell Laboratories and BPO. The system operated until 1978.

Global telephone communications began on 25 September 1956, when the first transatlantic telephone system, TAT-1 went into service. TAT-1 was a great technological achievement, made possible through the efforts of engineers from AT&T Bell Laboratories and BPO. It provided unparalleled reliability with fragile components in hostile environments. Engineers of the BPO, using their experience in subsea communications, developed the specific portion of TAT-1 between Clarenville, Newfoundland and Sydney Mines, Nova Scotia in this laboratory.

The plaques can be viewed in two of the three locations: at 52 Cormack Dr., Clarenville, Newfoundland, Canada; at the Cape Breton Fossil Centre in Sydney Mines on Cape Breton Island, Canada. The plaque at Gallanach Bay, about 4km south of Oban, Scotland is currently underwater and not in a safe location. However, here is a link to an article about visiting the site site at Gallanach Bay, including the cable housing where the cable comes ashore. A section of the cable and other artifacts and information about the project are in the Oban War and Peace Museum at the corner of the Corran Esplanade and John St., Oban.