The plaque will be mounted on a wall in the lobby of Shure's worldwide headquarters in Niles, Illinois.

The building is secure at all times. Visitors can simply enter the lobby entrance to view both the plaque and Shure's display of historical microphones and documents. 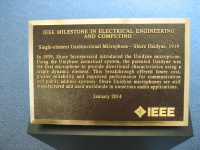 Additional access to the building would need to be arranged with Shure. 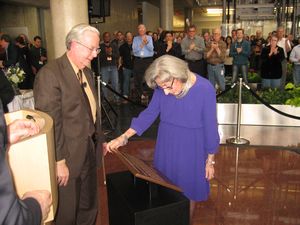 Benjamin Bauer (originally Baumzweiger) was born in Odessa Russia in 1913. His family fled Russia after the 1917 revolution and relocated to Cuba. At the age of 17, and speaking little English, Bauer moved to New York City to attend the Pratt Institute. After obtaining an associate Industrial Engineering degree, Bauer matriculated at the University of Cincinnati pursuing an Electrical Engineering degree. Bauer chose a five year work/study program and began working as an intern for Shure. When he graduated in 1937, he joined Shure full time as a transducer development engineer. It was the start of a distinguished career in acoustics and audio that included over one hundred patents. Benjamin B. Bauer became an IEEE Fellow member in 1952 and received his recognition on the Citation:

To fully understand the design details of the unidirectional microphone, you only need to read patent 2,237,298 which was filed by Benjamin Baumzweiger on September 29, 1938 and granted on April 8, 1941. To those in the sound industry, he authored the article “A New Unidirectional Microphone” in the February, 1939 issue of Electronics. Just before the IRE merger with the IEEE he contributed an article entitled “A Century of Microphones” to a commemorative issue of Proceedings of the IRE in May, 1962. However, the best endorsements about the significance of unidirectional microphone come from the sound industry. In the second edition of The Microphone Handbook by Jon Eargle (2012), the author says on page 350 in regard to Shure’s unidirectional microphone that “the M-55 has been in the Shure catalog in one form or another since its inception in the late 1930s. It is truly one of the icons of the industry and has been documented in press and news activities over the years.” In the Twelve Microphones that Made History by Jim Webb, (http://www.coutant.org/12mics/) the author says this about the Shure Unidyne Model 55. “It is hard to imagine another microphone based on its original concept and styling that has remained in production as long as some version of the Unidyne.” The invention of the single-element unidirectional microphone is truly a milestone. 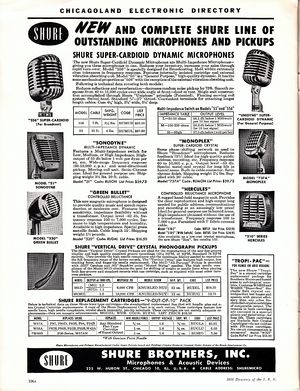