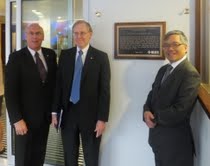 The Invention of Holography, 1947

In 1947 Dennis Gabor conceived the idea of wavefront reconstruction for improving the performance of the electron microscope. This became the basis for the invention of optical holography for three-dimensional imaging but implementation required coherent light sources and had to await the emergence of the laser some years later. Gabor was awarded the Nobel Prize for his invention in 1971.

The plaque may be viewed on or in the building of the Department of Electrical and Electronic Engineering, Imperial College, Exhibition Road, South Kensington, London, SW7 2AZ, England, UK. There is a staffed desk at the Exhibition Road entrance of Imperial College, where visitors could ask for admittance or guidance; a walk across an open courtyard to the Electrical and Electronic Engineering Building is required.

The BTH company no longer exists, and so the location of the milestone at Imperial College appears to be a fully-appropriate choice.

Gabor moved to Imperial College in 1949, and although this was after the actual invention date, his subsequent career at Imperial College was where many of the associated ideas were developed. His initial idea of holography was for improvement of the images from electron microscopes, based on the concept that the beam of electrons forming the image has a wave-based representation. The processing of these images in the spatial frequency domain led to his realization that phase information was important, and if a means could be devised for reproducing the phase and the magnitude information, this would provide a means of reconstructing a three-dimensional image. He called this a ‘hologram’ (from Greek, meaning ‘whole’ and ‘information’).

He may not have used the term holography until much later, because ‘holograph’ had an alternative previous meaning, for a document in the handwriting of its original author. His invention was many years before the invention of the laser (~1960) provided a source of sufficiently coherent light to make optical holography a practically useful and very significant technique. However the 1947 invention itself led to a new understanding of signal processing of images, and to such ideas as the Gabor Transform and, with the Wigner Transform, was a basis for wavelets and other methods which are now widely used in digital signal processing. Thus an important aspect of Gabor’s holography invention was the additional viewpoints that the concept brought to the field of signal processing, leading to many novel ideas. Many of these ideas arose during his time at Imperial College.

Biographies of Gabor tell that as a teenager he invented a tethered flying machine for use in fairgrounds (in October 1910, when he was age ~10), and his ambition was to be a physicist. However there were very few job opportunities for physicists in Hungary at that time, so he enrolled to study Electrical Engineering (Mechanical Engineering?) in Budapest, continuing his education in Berlin. He continued to be a prolific inventor, with many patents, and while working for the German company Siemens and Halske, is credited with the invention of the quartz-mercury vapour lamp, subsequently widely used in street-lighting. He left Germany for England, to work for BTH.

During his research and his many inventions, he maintained a strong interest in the importance of the influence and impact they could have on future society, believing that research and inventions should be clearly directed towards producing a ‘better future’. He wrote a popular book on this idea of ‘inventing the future’ [11]

“….He was also socially active as a humanist thinker: in 1968, he participated in the establishment of the Club of Rome, whose declared goal is: "sharing the responsibilities for the future of humanity"…….”

He was born in Budapest, Hungary, in 1900, the first of three sons of Günszberg Bernát and Jakobovits Adél. He changed his name from the Hungarian, Gábor Dénes, and died in England, in 1979. He had retired from Imperial College in 1967, but remained active in research and retained his connection with the College for many years. After his retirement he was also appointed as a Staff Scientist at the Columbia Broadcasting System (CBS) Laboratories, Stamford, Connecticut, USA,

Gabor’s invention of holography was an unanticipated step and relied on his understanding of images in the Fourier domain. He understood the importance of phase information, whereas previously only the magnitude spectra had been considered of any importance in the processing and reproduction of images. With the aid of phase information, a three-dimensional reconstruction of an image is possible. The practical realization of this concept requires a coherent light source, and therefore had to await the invention of the laser before substantial applications of holography could be achieved. However prior to that, the invention led to improvements in electron microscopy and to new understandings and viewpoints on image processing and other forms of signal processing.

At the time of the invention, Gabor evidently had a good opinion of his own achievement, and wrote in a letter to Max Born in June 1948 [9]: “……. a new thing and I have no doubt that it is my luckiest find yet …. ….. made me happier than anything I have done in the last 20 years ….. “

Holography is the most common anti-counterfeiting technology currently deployed. Holograms generally do not require special equipment for authentication which makes them ideal where thousands, if not millions of items need protection. Hence internationally they are widely found on credit/debit cards and increasingly on high-denomination banknotes, IDs and some high-value ticket consumer products. In future, holograms will incorporate other data forms and product tracking information (see for example E&T Magazine vol 7 issue 1 February 2012, page 48)

The invention of holography by Gabor was in many respects ahead of other work and ideas in the processing of images, and as such was unique. G. Saxby [10] reports in his 1988 book that there were six and a half thousand papers on holography, of which he judged ‘….. more than a thousand … contain material of importance’. X-ray holograms were achieved by 1987 at Lawrence Livermore laboratories, and it can be considered that some aspects of synthetic aperture radar systems have concepts in common with holography.

This invention has been recognized in many ways, including the award of the IEEE Medal of Honor to Dennis Gabor in 1970 with the citation: "For his ingenious and exciting discovery and verification of the principles of holography" and he was awarded a Nobel Prize for Physics, in 1971. While for many important inventions, there are several individuals who are credited with the basic ideas, and different opinions over who was the first, in the case of holography there seems to be no doubt or dispute that Gabor was the originator of the idea of holography. The basic science for the hologram concept existed by the early 19th century, since diffraction theory and the photographic process were known by then. However, it was not until Gabor had his key idea in 1947 that these techniques were thought about in this way, which makes the invention even more noteworthy. The critical step was recognising that "light could behave just like a coherent radio wave".

A video clip of parts of the Milestone dedication ceremony can be viewed at: http://vimeo.com/68305262

7. Wikepedia entry in Hungarian (some added information not in the English language version): http://hu.wikipedia.org/wiki/G%C3%A1bor_D%C3%A9nes_(fizikus)

8. Information about some of his inventions, etc. (in Hungarian): http://www.feltalaloink.hu/tudosok/gabordenes/html/gabdental4.htm