Milestones:First Operational Use Of Wireless Telegraphy, 1899-1902 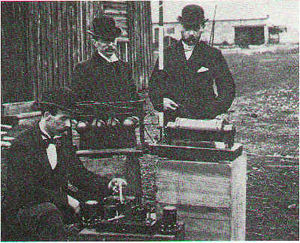 The first use of wireless telegraphy in the field occurred during the Anglo-Boer War (1899-1902). The British Army experimented with Marconi's system and the British Navy successfully used it for communication among naval vessels in Delagoa Bay, prompting further development of Marconi's wireless telegraph system for practical uses.

The two plaques can be viewed at the Castle of Good Hope and the Telkom Museum in the Victoria and Alfred Waterfront, Capetown, South Africa.

The Anglo-Boer War of 1899-1902 will be remembered as the last of the gentleman's wars, the war that marked the end of the Victorian era. For military communications, however, it commemorates a beginning, for it was during this war, one hundred years ago, that wireless telegraphy was used for the first time by an army on active service.

The British Army experimented with Marconi's system and the British Navy successfully used it for communication between naval vessels in Delagoa Bay, prompting further development of Marconi's wireless telegraph system for practical uses.

The Kruger's Boer Republic placed an order for six wireless telegraphy sets form the firm Siemens and Halske on 24 August 1899. The sets, which cost 110 Pounds Sterling, were supposed to provide communication for the fortifications around Pretoria, South Africa. They had a guaranteed range of nearly 15 kilometers and used antennas 36 meters high.

However, the sets never reached Kruger's forces because they were confiscated by customs in Cape Town. Later, British forces tired unsuccessfully to use the equipment supplied by Marconi on the arid inland plains of South Africa, possibly plagued by ground conductivity and the lack of matching resonance's of the essentially quarter-wave antennas.

The British Navy had more luck after installing five of the sets the Army rejected in the Delagoa Bay Squadron. Successful experiments over a range of 85 kilometers were recorded on 13 April 1900, and unsubstantiated claims were made for communication between Delagoa Bay and Durban, a distance of nearly 460 kilometers.